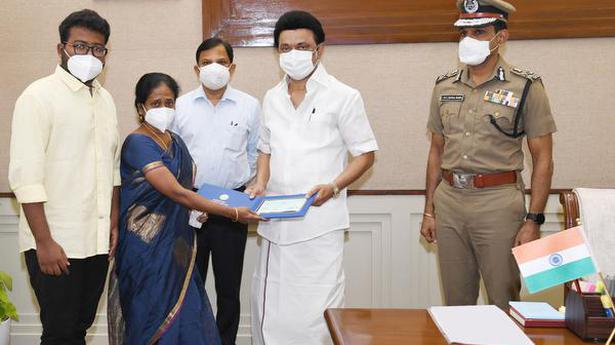 Special Sub-Inspector S. Boominathan, of the Tiruchi rural police, was murdered by a gang whom he was chasing, last Sunday

Tamil Nadu Chief Minister M.K. Stalin handed over a cheque for ₹1 crore from the Chief Minister’s Public Relief Fund to the family members of late Special Sub Inspector S. Boominathan, at the Secretariat in Chennai on Wednesday.

The SSI was murdered on Sunday last, when he chased a gang on his motorcycle after finding them in possession of a stolen goat. Three persons, including two juveniles were nabbed by the police in connection with the incident.

Home Secretary S.K. Prabakar and Director-General of Police C. Sylendra Babu were present during the event.