‘Do not sell sedatives to children and youth across the counter’ 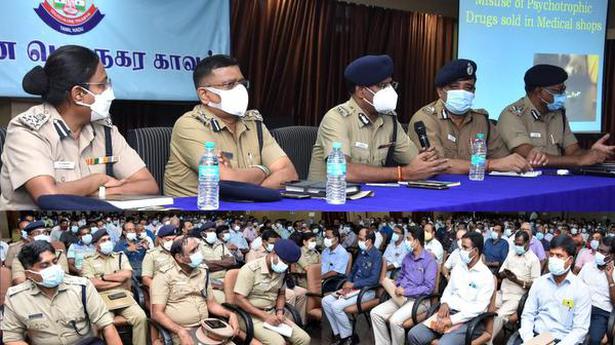 Following complaints of drug abuse by teens, the top brass of the Chennai city police held a meeting with the owners of pharmacies and instructed them not to sell sedatives to youngsters.

Additional Commissioner of Police, North, T.Senthil Kumar, said the city police have launched a crackdown under ‘Drive against Drugs’ and have been continuously detecting and arresting drug peddlers and smugglers.

“In line with those efforts, we held a meeting with pharmacy owners to check unauthorised sale of sedative drugs and tablets over the counters,” he said.

Additional Commissioner of Police, South, N. Kannan and joint commissioners also participated in the meeting in which over 200 pharmacy owners from across the city participated.

The officials said sedatives, psychotropic drugs and tablets should not be sold to anyone without prescription from a registered medical practitioner. The pharmacy owners should display caution boards in front of their shops stating the list of sedative drugs that would not be sold without a prescription.

Pharmacies should maintain a register on the sale of drugs and should install CCTVs inside and outside the shops. After delivering the drugs to customers who come with prescription, a bill should be generated and affixed with a seal ‘delivered’.

Pharmacies should strictly avoid the sale of sedative drugs to children and youth across the counter, said officials. Such drugs should not be handed over to them even if they are meant to be for others’ use.

The owners of pharmacies can also display a board containing phone numbers of local police stations and its inspectors so that the public can pass on any information about unauthorised sale, the officials added.

Sedative drugs should also not be sold in bulk. The owners/ staff of pharmacies can inform the police about persons insisting on delivery of sedative drugs without prescription.

Action would be taken as per law against the pharmacy owners if their outlets were found selling drugs in an unauthorised manner, police officials said.