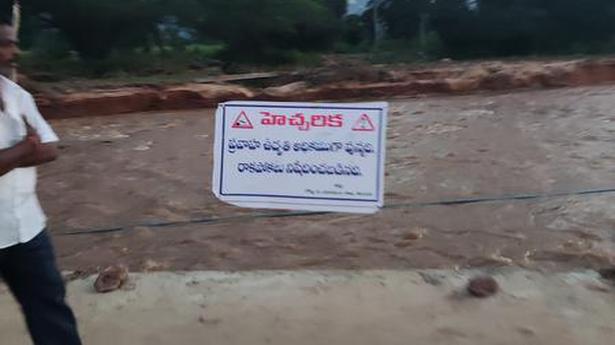 APSRTC’s Tirupati region has suffered a huge loss of ₹60 lakh each for three days when the swollen waterbodies had brought life to a standstill last week.

Following the heavy flooding that caused palpable damage to the arterial roads crisscrossing Chittoor district, the speedy repair works have ensured restoration of traffic in most routes.

Traffic remained disrupted on the Tirupati-Chittoor route via Pachikapalam and Devalampeta in view of the road closure due to flooding of Rayalacheruvu tank. However, the highway route connecting the temple city to the district headquarters city is intact. Similarly, traffic remains disrupted on the Pakala-Punganur route via Sodam and Somala, as the bridge across Gargeya river turned creaky. The overflowing Swarnamukhi river has also caused disruption in rural traffic in Yerpedu and Srikalahasti mandals.

APSRTC’s Tirupati region (Chittoor district) has suffered a huge loss of ₹60 lakh each for three days when the swollen water bodies had brought life to a standstill last week. “Though long-distance services from Tirupati towards Chennai, Kanchipuram, Vellore, Bengaluru, Nellore and Kadapa have been restored, the intra-district routes, especially those covering villages remain disrupted or diverted”, APSRTC Regional Manager T. Chengal Reddy told The Hindu.

Rural services from Tirupati towards Kandada, Musalipedu and Gudimallam suffered due to obstruction at Govindavaram and Papanaidupeta. The damaged Pakala under bridge took a toll on Mangalampeta and Maddinayanapalli routes. Similarly, services from Chittoor towards Bangarupalyam and Ragimanupenta were confined up to Aragonda and those towards Paturu and Pakala stopped at Irala. Madanapalle-Galiveedu services are operating up to Peddamandyam.

The heavy inflow of water in Rajampet-Nandalur section of SC Railways’ Guntakal division and Renigunta-Pudi section of Southern Railways’ Chennai division continues to haunt railways, with many trains running on diverted routes. The 17417/17418 Tirupati-Sainagar Shirdi-Tiruipati has been restored, but diverted to run via Pakala Dharmavaram and Gooty. 12246 Yesvantpur-Howrah and 12864 Howrah-Yesvantpur remained cancelled on Tuesday. The Renigunta-Pudi section damage led to cancellation of 22160/22159 Chennai Central-CST Mumbai-Chennai Central, 12164/12163 Chennai Central-LTT Mumbai-Chennai Central, 22619 Bilaspur-Tirunelveli (all commencing on Tuesday) and 12589 Gorakhpur-Secunderabad (commencing on Wednesday).