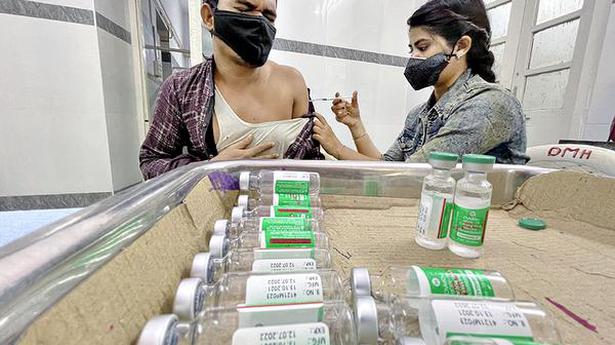 Despite the the Central Drugs Standard Control Organisation (CDSCO) extending the shelf life of Covaxin up to 12 months, private hospitals continue to be worried about the effective utilisation of vaccine stock lying with them. In the wake of this, the Association of Healthcare Providers India (AHPI) has recommended that the government consider allowing eligible population to get a booster dose.

In a letter to Union Health Minister Mansukh L. Mandaviya on November 12, AHPI said the government should consider allowing booster dose on a voluntary basis. “This will enable effective utilisation of the ample stock of vaccines available with the private sector,” the letter stated.

“Although the shelf life has been extended, we are worried as there are not many takers for the vaccine in the private sector. Overall, nearly 50 lakh doses of vaccines are lying unused in private hospitals across the country,” AHPI president Alexander Thomas told The Hindu.

“There is uncertainty regarding the duration of vaccine protection as a result of probable waning of antibodies. Moreover, we are also seeing several breakthrough infections in people who have been fully vaccinated. Our scientific committee comprising eminent doctors deliberated on these aspects. Keeping in mind the introduction of booster doses in several countries, we have recommended that the government should consider booster doses, at least for the healthcare workers now. We are told there is a meeting this week at the national level to discuss this,” Dr. Thomas said.

In another meeting with the Union Minister, a team of AHPI members led by Dr. Thomas suggested that the government should buy the vaccine stock available in the private sector. “But, the Minister assured us that the government will explore the possibility of exporting the stocks in private hospitals to countries that are in need,” the doctor said. However, some doctors expressed apprehension over the feasibility of exporting the stocks.

Private hospitals in Bengaluru were worried as the original six-month expiry of vaccines was nearing.

However, a recent letter from Bharat Biotech (manufacturer of Covaxin) to stakeholders stated that it was extending the shelf life of Covaxin from the existing six months to a year. Doses which were to expire between September 2021 and June 2022 can be used anywhere from March to September next year depending on the date of manufacture.