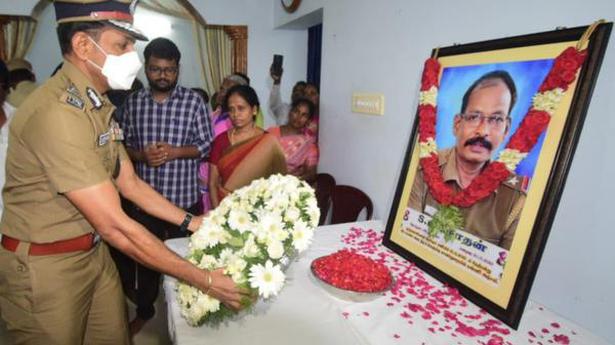 Police personnel can act in self defence using firearms, against those who attempt deadly attacks against them, C. Sylendra Babu said, after paying tribute to slain police officer S. Boominathan in Tiruchi on Tuesday

Director General of Police, C. Sylendra Babu, on Tuesday, said that instructions had been given to police personnel to carry firearms, as a safety measure, when they patrol in remote and desolate areas.

The law states that police personnel can act in self defence using firearms against those who carry out deadly attacks on them. Police personnel should not hesitate to use firearms under such extreme circumstances to protect their lives, even while upholding the law, Mr. Babu told reporters in Tiruchi.

The DGP placed a wreath at the portrait of murdered Special Sub Inspector S. Boominathan, and condoled with his family members at their house in Navalpattu.

Replying to a query, Mr. Babu said attacks on police personnel were continuing right from the time the police force was started over a century ago, and the police force was a “challenging one”. Boominathan had faced the situation boldly, and sacrificed his life while discharging his duty, the DGP said. Without treating the theft of a goat as a minor issue, Boominathan, of the Navalpat police station, acted swiftly and chased the three culprits on his motorcycle for 15 kilometres and intercepted them in the wee hours of Sunday. He had seized the weapon carried by the culprits and informed their family members over the phone about the crime committed by them, thereby acting in accordance with the law. However, Boominathan would not have realised that the culprits would launch a deadly attack on him after snatching the weapon from him, Mr. Babu said.

Describing Boominathan as a hero, the DGP said the Special Sub Inspector had undergone commando training and received the Chief Minister’s medal and acted with valour, wisdom and utmost dedication to duty.

Investigations revealed “cent per cent” involvement of the three accused, including two juveniles, who were arrested on Monday. The investigation was proceeding based on evidence, including video footage.

To another query, he said Boys Clubs were functioning in all districts to keep children away from crimes by holding various sports events for them.

The DGP expressed his “heartfelt thanks” on behalf of the Tamil Nadu Police to the Chief Minister, for issuing an order granting Rs.1 crore as solatium to Boominathan’s family and a government job for a family member.