‘PM called us 10% government, but contractors told him how much BJP leaders are demanding’ 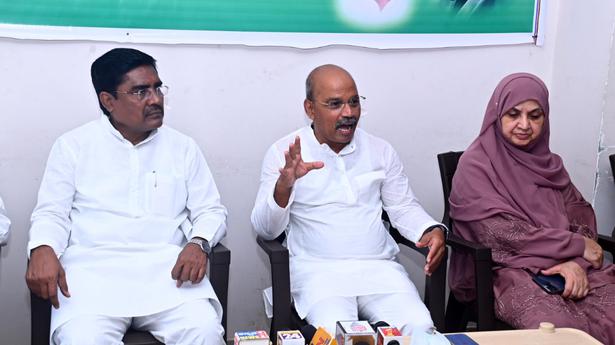 Taking serious note of the recent letter written by Karnataka State Contractors’ Association’s president D. Kempanna to Prime Minister Narendra Modi alleging that contractors in the State were forced to pay a bribe of up to 40% of the project cost to government officers and elected representatives to get their dues cleared, Karnataka Pradesh Congress Committee spokesperson Dr. Sharan Prakash Patil demanded that the Union Government order a thorough investigation into the allegations by the Central Bureau of Investigation (CBI) under the supervision of a sitting Supreme Court judge.

“Prime Minister Narendra Modi had, in one of his election rallies in Karnataka when Congress leader Siddaramaiah was the head of the government, alleged that State Government was a 10% government. Now, contractors have officially written to Mr. Modi alleging that they are forced to pay bribes of up to 40% of the project cost to authorities and politicians in the BJP government. Mr. Modi should order an enquiry by the CBI. Since we have no full faith in the CBI under the BJP government, we also demand that the investigation be monitored by a sitting judge of the Supreme Court,” Mr. Patil said at a press conference at the Congress office in Kalaburagi on November 23.

Referring to State BJP president Nalin Kumar Kateel describing the family of veteran Congress leader Mallikarjun Kharge as ‘a gang of looters’ at a Jan Swaraj Yatra in Kalaburagi on November 20, Mr. Patil pointed out that not just contractors but everybody in the State now knows who the ‘gangs of looters’ are.

“The contractors’ letter to the Prime Minister exposed who the looters are. It is not a secret that BJP leaders, in connivance with bureaucrats, are looting public money in Karnataka. Mr. Kharge never faced any corruption charge in his 50-year-long political career. Yet, the BJP questions his sincerity and commitment. Some even asked Mr. Kharge to declare his property details. Mr. Kharge has been declaring his property details during the filing of his nomination papers in every election,” the former Minister said.

Pointing out to the crop loss due to the recent rains, Mr. Patil demanded that the government to immediately conduct a survey and compensate affected farmers.

“Standing crops on large tracts of land have been destroyed due to the recent heavy rains. The government is not bothered to conduct a survey and pay compensation to affected farmers. The Model Code of Conduct, which is in force for the MLC elections, would not come in the way of paying compensation. Standing crops on around 2.44 lakh hectares were destroyed in Kalaburagi district alone during the last kharif season, and the government has not paid compensation to any farmer till date,” Mr. Patil said.