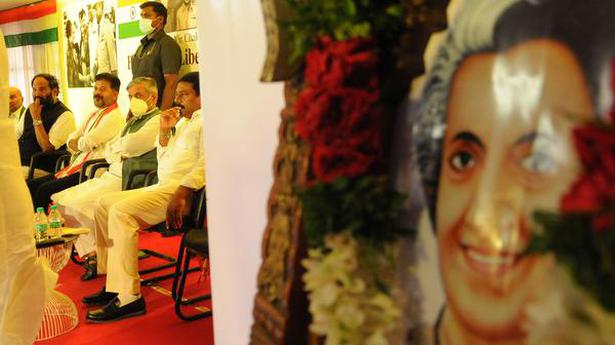 The present regime in the country led by Narendra Modi is trying to dilute the monumental role of Indira Gandhi in the liberation of Bangladesh, but without her courageous decisions, the Bangladesh war could have continued for months, argued Praveen Davar, convenor of the AICC Commemoration Committee on Bangladesh Liberation War.

Capt. Davar, who was speaking at a programme organised by Telangana Congress unit to celebrate the 50th anniversary of the Bangladesh Liberation War of 1971, said Indira Gandhi proved how decisive leadership can lead the country to victory. He said over 4,000 Indian soldiers made supreme sacrifice in the 1971 war while about 10,000 others were injured.

Former TPCC president and Nalgonda MP, N. Uttam Kumar Reddy, who himself served as an Indian Air Force (IAF) pilot, said the dynamic leadership of Indira Gandhi led to victory over Pakistan in just 13 days. He said Indira Gandhi did not succumb to the pressures of USA and China. Her strong leadership and unwavering commitment to the Bangladeshis was the decisive factor.

Hailing the Indian armed forces, he said the army occupied 15,000 sq km of area and took 93,000 Pakistani solders as prisoners of war, paving the way for the creation of Bangladesh. This is a golden chapter in the history of Indian Army and the young generation should recall the sacrifices of our soldiers and the political leadership, he added.

Lt. Gen. A.R.K. Reddy, who participated in the war, said Indira Gandhi travelled for 23 days to various countries during that time to convince the world why India was entering the liberation war. He revealed that then US President, Richard Nixon tried to ignore her argument and she had the courage to walk out of that meeting.

Then she confabulated with Atal Behari Vajpayee, a leader in the opposition party then, and convinced him to go to United Nations to explain India’s position, which he did with aplomb. There was no politics when it came to the country and that’s why she managed the war so well, he said. She also neutralised several Arab nations with the political acumen giving an advantage to India’s position, the former Army officer averred.

Lt Gen Reddy said exemplary leadership of the then Defence Minister Jagjivan Ram and military leadership of Army Chief Sam Manekshaw ensured that there was no escape for Pakistan. Tracing the history of the war, he said the present and future generations should be made aware of the great Indian victory, ultimately liberating Bangladesh.