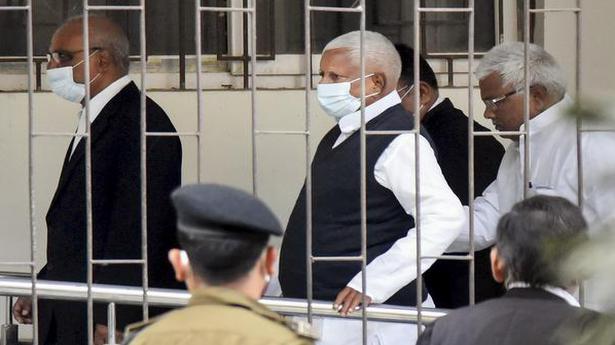 Ailing Rashtriya Janata Dal chief Lalu Prasad Yadav on November 23 appeared before a special CBI court here in connection with a fodder scam case related to fraudulent withdrawal of money from the treasury in 1996.

In the court, Mr. Prasad pleaded for a reprieve from physically appearances as he had been ailing for long. The special court judge Prajesh Kumar granted him the reprieve, saying Mr. Prasad’s lawyer could represent him from the next hearing.

Earlier, the special court had asked all 28 accused, including Mr. Prasad, to appear physically in the court on November 23. The court fixed November 30 as the next date of hearing.

The case pertains to a fraudulent withdrawal of ₹46 lakh from the Banka treasury in 1996.

The CBI had named 44 as accused in the case. However, over half a dozen of them died during the trial.

Barring this case, all fodder scam cases are lodged in Jharkhand, which was bifurcated in 2000 from Bihar to become a separate State.

The cases were registered over fraudulent withdrawal of money from the Chaibasa, Dumka and Deoghar treasuries of Jharkhand.

Suffering from multiple diseases, Mr. Prasad is currently on bail in connection with fodder scam cases and has been recuperating at the residence of his elder daughter Misa Bharti in New Delhi.

Mr. Prasad arrived in Patna on November 22 for the hearing.

Recently, he visited the city to address public meetings in connection with the bypoll but his health deteriorated and he returned to Delhi for medical attention.