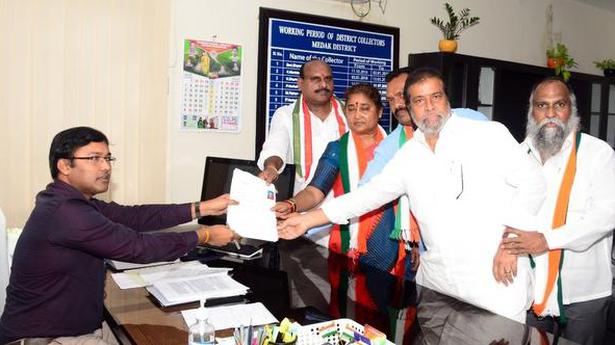 After weighing political options of staying away from the Local Body MLC elections, Telangana Congress finally decided to field candidates in Medak and Khammam districts while exploring the options of supporting independent candidates in other districts.

TPCC working president and MLA T. Jayaprakash Reddy, who has been arguing for putting up candidates despite the shortage of numbers, hoped that his wife would emerge triumphant. Several MPTCs, ZPTCs and Municipal councillors who form the voters list will support him irrespective of their party affiliation, he claimed.

Mr. Reddy along with former Deputy Chief Minister Damodar Rajnarsimha, DCC president T. Narsa Reddy, former MP Suresh Shetkar accompanied his wife for filing the nomination and said TRS ministers were worried with his wife’s entry in the fray, hinting at Finance Minister T. Harish Rao. He also alleged that the Minister was putting pressure on the officials to reject the nomination of his wife.

He also alleged that former Collector and TRS MLC P. Venkatrami Reddy has been made incharge of the TRS candidate with the sole intention of buying the voters with the illegally acquired money. He said the former collector had acquired huge money in the government projects like Mallannasagar, Kokapet and Kollur land sale and was now ready to spend that in the elections. “Let people take money from him as it belongs to them but I am sure they will vote for the Congress candidate,” he said.