Where chess reigned as a spectator sport 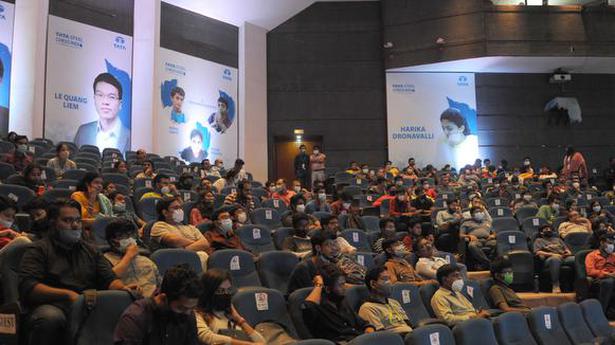 Chess is a lonely battle. Not in Kolkata, though.

The Tata Steel Chess, which concluded at the National Library on Sunday, attracted big crowds on all the five days. Not even the pandemic could deter the enthusiasm of chess fans, as they came out to support their favourite players and watch them in action from close quarters.

They would greet the players with loud cheers and would applaud their efforts when the games are over. Some of them could be seen waving Indian flags, too.

For someone playing at the Tata Steel tournament for the first time, it could be a strange experience. “It was so strange that I didn’t know how to react,” says D. Harika, the World No. 12 in women’s chess. “Then I got used to it and it felt great to play a tournament in front of a crowd. It is nice to connect with the fans.”

That rarely happens in chess. The tournaments are often played in halls, with hardly any chess fan turning up to watch.

But right from the first edition of the Tata Steel event in 2018, people have been coming to the venue in large numbers. In fact, they paid for the ticket in the first two years of the tournament; admission was free this year.

The only other occasion one could recall of chess attracting so much attention from the local people was the World chess championship match between Viswananthan Anand and Magnus Carlsen in 2013. But, then, Chennai is Anand’s hometown and is also the chess capital of India with so many Grandmasters and so many kids learning the game.

“I think the passion the people of Kolkata have for chess is something you may not find anywhere,” says Woman International Master Saheli Dhar Barua, who is now a coach. “As someone who lives in the city, I felt so happy to see so many fans coming to the venue to watch the tournament.”

People far away from Kolkata too have come to the city for this elite tournament, like Ruchika Kaushik, who flew down from Delhi. “My daughter Siya is learning chess and we wanted to watch his event,” she says. “I could see the city’s love of chess. We have been to the Gariahat flyover, under which people play chess regardless of the noise all around.”

Kolkata, of course, is known for its love of sports, especially cricket and football. Looks like chess too is fast making some popular moves.