Three Kerala scientists to be honoured at ‘Intromet 2021’ 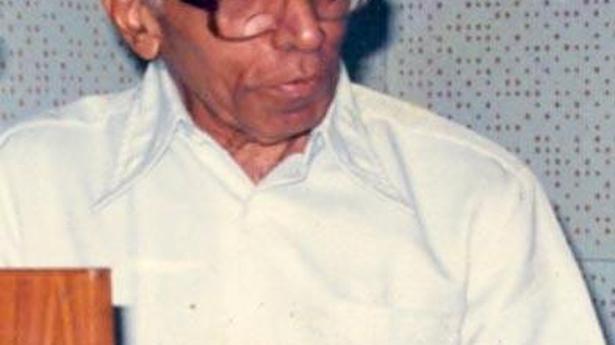 The International Symposium on Tropical Meteorology (‘Intromet 2021’), being organised under the aegis of the Cochin University of Science and Technology (Cusat) in collaboration with the Cochin Chapter of the Indian Meteorological Society, from Tuesday will honour three eminent scientists from Kerala — R. Ananthakrishnan, Anna Modayil Mani, and P.R. Pisharoty, who contributed significantly to meteorological research in the country.

The Indian Postal Department would release special postal covers on Tuesday to honour the scientists during the symposium, said K. Mohankumar, Founder Director of the Advanced Centre for Atmospheric Radar Research here. There will also be memorial lectures in their honour.

R. Ananthakrishnan, former director and honorary fellow of the Indian Institute of Tropical Meteorology, Pune, was born in Palakkad and started his career as a research scholar in the field of light scattering under the guidance of Nobel laureate Sir C.V. Raman. He was awarded D.Sc. in 1937 from the University of Madras. His contributions earned him the Padma Shri in 1969 and the C.V. Raman Centenary Medal in 1988.

The research contributions of Ananthakrishnan include understanding of light scattering and the Raman Effect, solar physics and meteor astronomy and meteorology. In meteorology, his work covered areas such as aerology, atmospheric dynamics, thermodynamics, monsoon circulation, storms and depressions, Indian rainfall and features associated with the onset of the monsoon. He was instrumental in launching the M.Sc. course in meteorology at Cusat. He passed away in 1999.

Scientist Anna Modayil Mani was born in Peermade and obtained her B.Sc. (Hon.) in 1939 from the Madras Presidency College. She began her scientific career with C.V. Raman at the Indian Institute of Science, Bengaluru, where she studied the fluorescence and absorption patterns and spectra of diamonds. In 1945, she went to the Imperial College, London, and later to the British Meteorological Office, studying the evolution of weather instruments. She visited several field observatories and manufacturers of meteorological instruments in England and Scotland. and later joined the India Meteorological Department (IMD).

She made significant contributions to meteorological instrumentation, conducted research, and published papers on solar radiation, atmospheric ozone and wind energy measurements. She retired as the Deputy Director-General of the IMD in 1976. She passed away in 2001.

P.R. Pisharoty is among the most distinguished Indian meteorologists of international repute and is considered the ‘Father of Indian remote sensing’. He was instrumental in heralding remote sensing in the country through pioneering experiments to detect coconut wilt disease in Kerala in the late 1960s. Pisharoty was a member of the World Meteorological Organisation (1963-1968) and later its chairman; a member of Joint Organising Committee for Global Atmospheric Research Programme (1969-77); and vice president of the International Association for Meteorology and Atmospheric Physics (1972-79).

He served as director of Remote Sensing and Satellite Meteorology, at ISRO Space Application Centre, Ahmedabad, during 1972-75. He was conferred the Padma Shri in 1970, and received the prestigious International Meteorological Prize 1989 of the World Meteorological Organisation. He passed away in 2002.