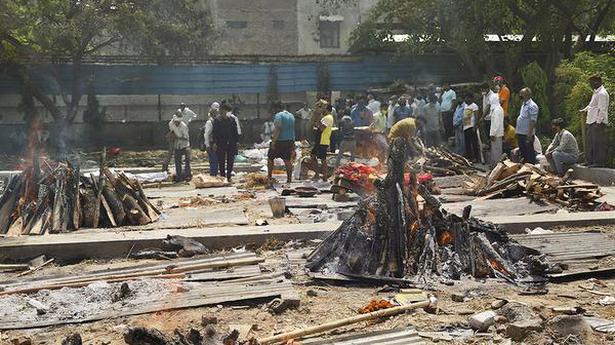 The Supreme Court on Monday directed the Centre to “gather information” from the States on the progress made by them in disbursement of the ex gratia compensation of ₹50000 to the kin of those who died of COVID-19.

A Bench of Justices A.M. Khanwilkar and C.T. Ravikumar also sought information on the headway made so far by the States in constituting grievance redressal committees to hear complaints made by the families regarding compensation payment.

Solicitor General Tushar Mehta assured the information would be available on Monday.

The Bench, however, expressed its dissatisfaction with a modified government resolution (GR) issued by Gujarat on the process of compensation payment.

In the previous hearing, the Bench pulled up Gujarat for “overreaching the directions” of the court by constituting a scrutiny committee to check on the genuineness of the applications made by the victims’ kin for compensation.

The court said the compensation should be automatically paid on the presentation of the death and RT-PCR certificates of the patient. But Justice Shah said the process continued to be complicated. Now, the State has come out with a list of documents to be presented before the scrutiny committee.

Mr. Mehta, who is appearing for Gujarat along with the Centre, sought more time to sit with officials and iron out the issues with them. “I will sit with the responsible officers and take a call on the same. Let me examine this. let me examine…” he observed.

The court gave him time till Monday. It asked the Gujarat Chief Secretary, who was virtually present, to discuss the issue with Mr. Mehta.

The court stated, in the meanwhile, the government should start disbursing compensation to families of victims whose details are already available on the Cowin website.

It cautioned Gujarat that it would be compelled to appoint Secretary of the Legal Services Authority as ombudsman, like in the Gujarat earthquake, unless the compensation is paid, at least as a starting point, to the families of 10,000 victims.

The court had slammed the Gujarat government for being “insensitive” to the sufferings of families who lost their loved ones to COVID-19 by forcing them to “run from pillar to post” to get their ex gratia compensation of ₹50000 each.

“This cannot be done to people who have already suffered so much… The government should extend a helping hand rather than be adversarial. Your officers take it in an adversarial way… People are still suffering and that is the reality,” Justice Shah had addressed Mr. Mehta.