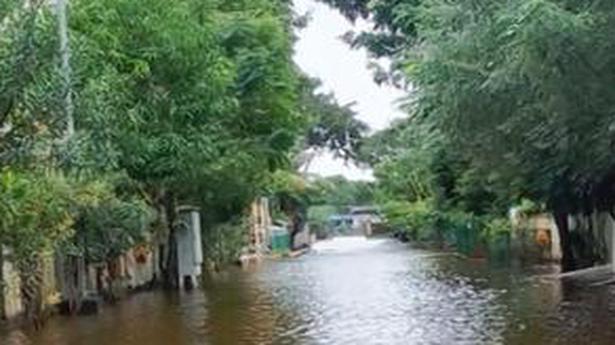 People in Pallikaranai want Corpn. to construct a channel

For over a week, water from Anai Eri, a large lake in Pallikaranai, has been flowing through the streets in Anna Nagar, Dilli Babu Nagar, Ambal Nagar and Chettinad Enclave.

“The water just keeps gushing without a pause, making walking or riding two-wheelers next to impossible. The flooding has also brought in snakes. The stormwater drain on our streets is hardly enough to carry the volume of water that is flowing,” said Srikanth, a resident of Chettinad Enclave.

At some points, during and after heavy rain, the water level reached over four feet, forcing residents to remain inside their houses.

Though Anai Eri has been desilted and restored with bunds all around, a proper outlet channel has not been planned, pointed out an environmental activist, who did not want to be named.

“If there is a waterbody, then water will flow both in and out of it. Restoration does not mean beautification. Are there any guidelines for restoration that have been set or followed,” he said. A senior citizen, who pointed to the stagnant water on an open plot behind his house, said a large and proper channel must be formed to carry the water to the Narayanapuram lake, which is its natural course. Though the Greater Chennai Corporation had made a proposal last year to construct a channel, it is yet to be implemented.

“Land acquisition has to be carried out since private plots are also along the chosen alignment. We are requesting the Corporation to construct the channel as soon as possible,” said Venkatesan, another resident.