INRC: Team JK Tyre keen to start the season on a positive note 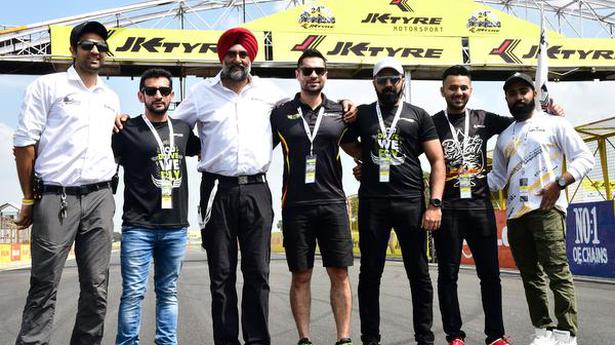 Cars are being set up in a different way to ensure maximum speed and grip on the surface, says Gill

Amidst the sounds of the roaring engines of the Formula LGB4 cars, the JK Tyre boys were seen discussing strategies for the upcoming season of the Indian National Rally Championship (INRC) for cars scheduled to begin in Visakhapatnam next month.

The team wants to start from the City of Destiny, a new venue, on a rather positive note. And, it has none other than its international rally star Gaurav Gill to guide them in the journey.

“There’s going to be lot of tarmac in Visakhapatnam and it’s something that none of us have attempted before. It is something completely new and, I am excited as well to go to a new town for the sport,” said the Arjuna awardee.

“It’s going to be on a beach road, something different but similar, in terms of the tarmac surface area in Arunachal Pradesh. We have got some special compounds from JK Tyre and the cars are being set up in a completely different way to ensure maximum speed and grip on that kind of a surface,” he added.

According to him, the learning never stops. “I am training my teammates and passing all the knowledge that I have gained over years of driving internationally. But, I can only take the horses to the water but cannot make them drink.”

He said that he has imparted some specialised training a couple of days ago. “We were lucky to have the Kari track. We did not use the entire width but only a quarter of it to make it look like a rally track. We focused more on the finesse in driving than outright speed. The science behind driving is most important so that you can actually drive anywhere.”

For the team, the cars are completely set up for tarmac. “They are very low, like race cars down to the ground, and we have got special semi-slick tyres that is safe to use on the road. Also, we have got different brakes that can encounter higher temperatures.

His agenda is to have the best results and be on top of the podium. “I am trying to incorporate that into my team. It’s not going to be easy but not difficult as well if everyone puts in the effort together,” said Gill.