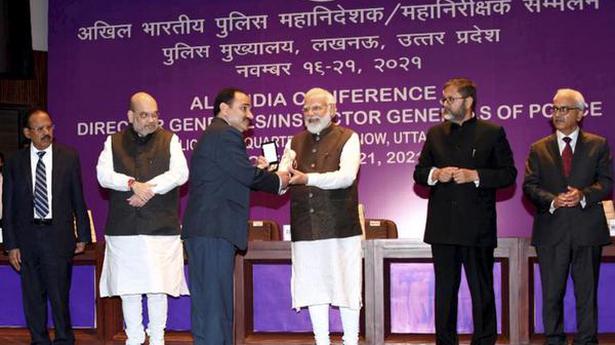 Prime Minister Narendra Modi told a police meet on Sunday that post-COVID-19, there had been a positive change in police attitude towards the general public.

The Prime Minister addressed the valedictory session of the three-day annual DGPs’ conference that was held in Lucknow in a hybrid format this year.

The conference was inaugurated by Union Home Minister Amit Shah on November 19 where on stage he was accompanied by the three Ministers of State for Home — Nityanand Rai, Nisith Pramanik and Ajay Kumar Mishra. Mr. Mishra, whose son is accused of mowing down farmers in Lakhimpur Kheri in Uttar Pradesh last month, was conspicuously absent from the group photo of Prime Minister Narendra Modi with the senior police officers on Sunday.

National Security Adviser Ajit Doval, Director, Intelligence Bureau Arvinda Kumar, Home Secretary Ajay Kumar Bhalla and the three Ministers were there for the photo session. Though Mr. Mishra attended the conference on Friday and Saturday, he was not there on Sunday. A day ago, Congress general secretary Priyanka Gandhi Vadra wrote to PM Modi to sack Mr. Mishra and not share stage with him at the conference.

Mr. Modi told the officers that he had, in previous conferences, observed that the police used force and curfews to resolve issues but this time he saw the police leadership serving the citizens professionally and had also earned their trust, a senior official who attended the conference said.

Mr. Modi also called for an analysis of all police related incidents and developing case studies, to make it an institutionalised learning mechanism.

“He called for constituting a high-power police technology mission, under the leadership of Union Home Minister to adopt future technologies for grassroot policing requirements. Citing the importance of technology in the lives of the general public, the Prime Minister gave examples of CoWIN, GeM and UPI,” a Home Ministry statement said.

The conference was attended by 62 DGPs and IGPs, DGs of the Central Armed Police Forces. More than 400 officers of various ranks attended it virtually from the Intelligence Bureau (IB) offices.

In the run-up to the conference, various core groups of DGPs were formed for holding discussions on key aspects of national security such as prison reforms, terrorism, Left Wing Extremism, cyber crimes, narcotics trafficking, foreign funding of NGOs, drone-related matters, development of border villages, among others, the statement said.

“He suggested development of inter-operable technologies which would benefit police forces. …He also suggested positive use of drone technology. He stressed on review of SMART policing concept introduced in 2014 and suggested development of a roadmap for its continuous transformation and institutionalisation. To tackle some of the routine challenges, he urged involvement of highly qualified youth to look for technological solutions through hackathon,” the statement said.