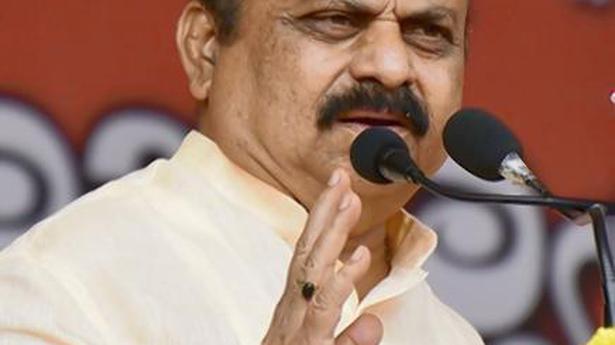 Under attack from Opposition parties over handling of relief to rain-affected regions in Karnataka, Chief Minister Basavaraj Bommai on November 21 said that he had spoken to the Election Commission of India (ECI) seeking permission for Ministers to hold meetings with officials in the districts and also to conduct damage surveys. Compensation will be announced after reviewing the damage assessment report, he said.

“Ministers need permission from the EC. I have spoken to the EC yesterday seeking approval and the Chief Secretary is also writing a letter to the EC,” the Chief Minister told reporters in Bengaluru on November 21.

While former Chief Minister H.D. Kumaraswamy had criticised the Ministers for staying away from relief work to take part in electioneering, another former Chief Minister Siddaramaiah on November 21 attacked the government for shoddy relief work. In view of the election to 25 seats to Legislative Council from local authorities on December 10, model code of conduct is in place.

“Several Ministers are already there in the districts. I have spoken to the EC seeking permission for Ministers to hold an official meeting to review the situation. Soon after the permission is obtained, Ministers will travel,” Mr. Bommai defended.

Further, he said that since the rains had not abated in several districts, rain related damage surveys have not been completed. “By today evening, whatever reports are ready will be reviewed, and after holding discussions with officials I will announce compensation.”

The Chief Minister said that the unexpected and untimely rains due to depression in Bay of Bengal had damaged crops and connecting roads, taking human toll in South Interior, North Interior and Coastal Karnataka regions. “We have already released compensation for crop losses that over 3 lakh farmers suffered in July, August and September. I have ordered a release of ₹130 crore that was due for compensation.

When his attention was drawn to criticism that he had not focused on rain damage relief in Bengaluru, Mr. Bommai said that he had already visited Koramangala, Madiwala and HSR layout. “I am definitely concerned about Bengaluru. In the coming days, I will go around the city. I have also directed officials to take up work soon after rain recedes.”

The Chief Minister also said that his government will provide sanction for prosecution against officials charged with corruption following a massive search in BDA by Anti-Corruption Bureau (ACB) sleuths. “Action will be taken up to clean and streamline BDA for providing better services to the common man.” He also acknowledged that he had received individual complaints against BDA in the past.