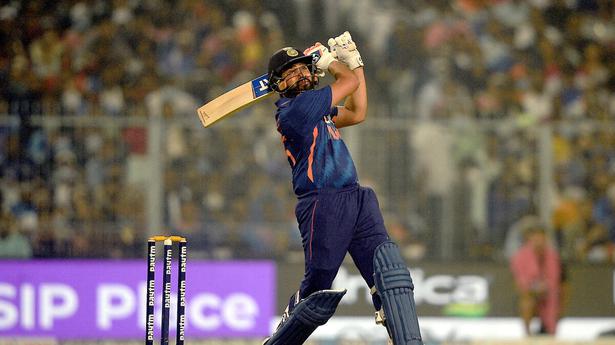 Axar Patel’s triple strike derailed New Zealand and handed India a 73-run win in the third T20I at the Eden Gardens here on Sunday. The home team swept the series 3-0 and is on a six-match unbeaten run in T20Is.

Set a challenging target of 185, New Zealand lost the plot early. Left-arm spinner Axar scalped three top-order wickets in quick succession to leave the Kiwis reeling at 30 for three. Martin Guptill (51, 36b, 4×4, 4×6) played a lone hand, but once he holed out, it was game over.

Axar, introduced into the attack in the third over, dismissed Daryl Mitchell off his very first delivery. Mark Chapman charged at a wide and flighted ball, and was stumped by Rishabh Pant. Glenn Phillips was the next to go, losing his stumps to a failed reverse-sweep.

Guptill, severe on the pacers, marched on. Leg-spinner Yuzvendra Chahal, playing his first match of the series, got the danger man to mishit a flighted delivery to Suryakumar Yadav at long-on.

Venkatesh Iyer filled the medium-pace all-rounder role left vacant by Hardik Pandya. Venkatesh got the wicket of Adam Milne, though New Zealand had thrown in the towel at this point.

Earlier, Rohit Sharma’s fluent 56 helped India to a good total. The skipper and Ishan Kishan, who replaced K.L. Rahul in the XI, gave the Men in Blue the ideal start. Rohit was particularly aggressive, using the pace well to clear the ropes. He executed his favourite pull shot to send a short ball from Trent Boult over deep square-leg, and deposited a leg-stump dart from Lockie Ferguson into the fine-leg stands.

India motored to 69 without loss in the PowerPlay. Left-arm spinner Mitchell Santner, who led the visiting team in place of Tim Southee, came into the attack and made an immediate impact.

Santner took out Kishan with a length ball outside off, forcing an edge to the wicketkeeper. In the same over, he tempted Suryakumar (0, 4b) to drive another length ball to Guptill at cover.

Rishabh (4, 6b), whose ugly hoick lobbed to long-on, was Santner’s third victim. At 83 for three, India was forced to rebuild.

Rohit reached his 26th T20I fifty, before he fell to a stunning one-handed reflex return catch by leg-spinner Ish Sodhi.