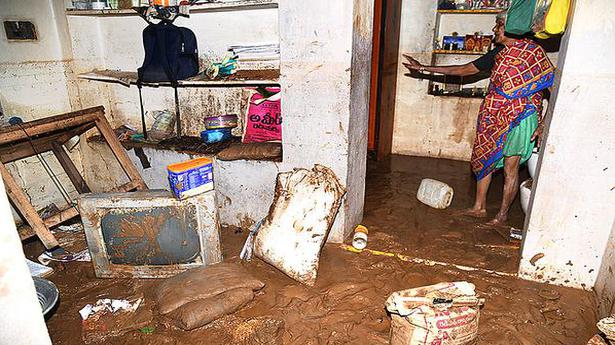 The road bridge across the Papaghni river connecting Kadapa and Tadipatri towns collapsed on Sunday under the impact of the floods.

With the bridge showing signs of sinking on Saturday, the Kadapa district administration diverted the vehicular traffic via alternate routes through Yerraguntla and Proddatur. However, smaller vehicles continued to proceed towards the bridge and remained stranded for up to a kilometre on its both sides. The heavy rains have battered the district, especially the areas in Kadapa, Rajampet and Kamalapuram constituencies.

Amid speculative figures that put the number of deaths in the rain-related incidents at more than 50, the district administration put the toll at 15 as on Sunday evening. “We have identified 15 bodies and handed them over to the relatives. Compensation of ₹5 lakh each has been paid to the kin of 13 victims. As many as 22 persons have been reported missing and a search has been launched to trace them,” Kadapa Collector V. Vijayarama Raju told The Hindu.

Relief measures have been undertaken in Nandalur, Penagalur Rajampet and Vontimitta areas on a brisk pace. Earthmovers have been deployed to clean the roads and restore power connectivity in the villages abutting the water bodies where electric poles and wires got washed away in the swirling waters.

The Panchayat Raj Department is using motors to clear the submerged areas. The revenue officials are supplying water through tankers in Chakrayapet mandal. In Tsundupalle mandal which is prone to viral fevers, the health officials conducted a camp at Rayavaram, Thimmasamudram, Mudampadu, Bagampalli villages.

Meanwhile, Mylavaram reservoir continued to receive heavy inflows from the upper reaches. As a result, the irrigation authorities released water at the rate of 70,000 cusecs from the project.

In Kadapa, a three-storeyed building collapsed in Radhakrishna Nagar. Fire personnel rescued a woman and her daughter. The police and villagers rescued a man, Pratap Reddy, who got washed away in a river at Lingala village in Pulivendula constituency.