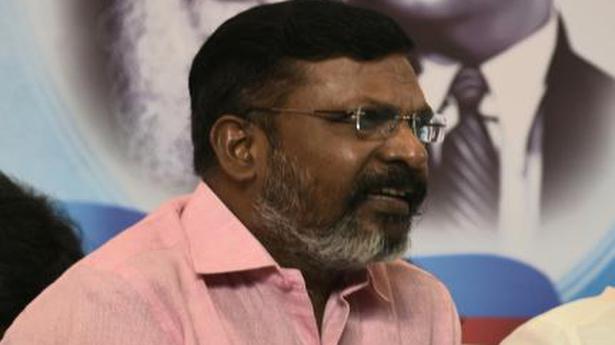 Speaking to reporters, he said that the Opposition parties across the nation had stood with the farmers, who were clear about their demands. Not in a mood to listen to the Opposition and the farmers, the Centre had then claimed that they were here to uplift the farmers and neglected their suggestions.

Facing the cold and rain, as thousands of farmers camped on the outskirts of New Delhi for over 18 months, the BJP feared that they would lose the ensuing elections to be held in Uttar Pradesh, Punjab and a few other States early next year. Hence, as a face saving tactic, the PM had announced that the government would withdraw them in the winter session of the Parliament.

“This is a clear victory for the farmers. It is also a beginning of victory for all the Opposition parties who have lined up to defeat the fascist BJP”, Mr Thirumavalavan said and added that the BJP had taken the decision, though late, keeping the polls in mind.

On the rain in Tamil Nadu, he said that Chief Minister M K Stalin’s war-footing efforts had prevented loss of many lives and properties.

The VCK would present “Ambedkar Sudar” award to Mr. Stalin at a function to be held in Chennai during December, he said and added that the VCK would hold social justice conferences in different parts of the State in the coming months.

He was here to address a conference organised by the party.