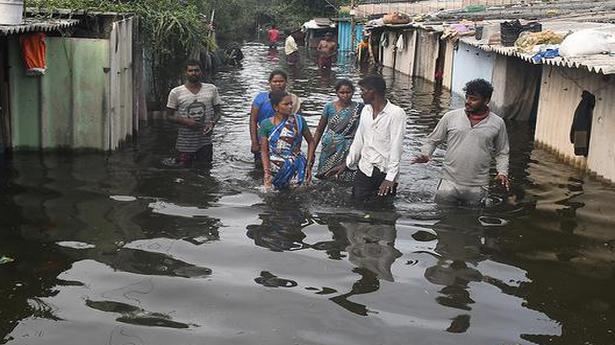 At least 31 low-lying areas in the city were flooded on Saturday. In north Chennai, areas in the Kosasthalaiyar river basin, such as Manali, were heavily flooded. In addition to residential areas, container yards and industrial areas too bore the brunt. Many villages in Tiruvallur district were inundated.

Officials said Poondi reservoir received heavy inflow from various sources like Nandhi river and Kesavaram and Ammapalli dams in Andhra Pradesh. The Kosasthalaiyar carried nearly 45,000 cusecs of water on Friday. Although the river had a capacity to carry up to 70,000 cusecs downstream, stormwater from some of the villages flowed in, and this led to reverse flow in places like Vellivoyal and Idayanchavadi, the officials said.

The Water Resources Department reduced water release from Poondi reservoir to 23,000 cusecs as there was a dip in the inflow. The reservoir has a storage of 2.95 tmcft. against its capacity of 3.23 tmcft, and the water level is maintained at 34.41 feet against its maximum level of 35 feet.

Minister for Milk and Dairy Development S.M. Nasar and Tiruvallur Collector Alby John Varghese inspected the flooded areas, including Vellivoyal, along the Kosasthalaiyar. The Minister inspected the spot near Vazhuthigaimedu at Sholavaram taluk, where the river bank had been breached and sand bags had been placed as a temporary measure.

Boats were used to rescue stranded residents at many places in north Chennai.