Despite facing flak, Nihangs rejoice with their farmer brothers 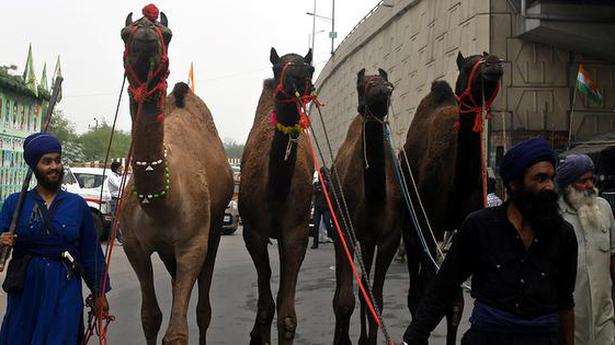 The SKM had distanced itself from the sect after the killing of a person on the Singhu protest site.

The Nihang Sikhs, also known as Sikh warriors, were among the proudest and the happiest lot at the Singhu border on Saturday, a day after PM Modi announced the scrapping of the three farm laws. This, despite the flak they said they received last month after a 33-year-old man was allegedly lynched by members of their sect at the protest site.

Donning blue robes and boasting swords and armour, the Nihangs rejoiced at the fact that their farmer brothers had won their battle after a year-long struggle and that they felt proud of having acted as their protectors throughout the protest. They said that while there was a fair amount of opposition after last month’s incident, “they felt validated today as their sole goal was to protect the farmers and see them realise their demands”.

Gyani Shamsher Singh, a Nihang Sikh, said, “It is a victory for all of us…there is no difference between Nihangs and farmers, our duty is to protect them and that is what matters for us. We hope a written assurance is given by the PM but this has happened due to the contribution of everyone who was part of the protest”.

He said that after last month’s incident, while Nihangs faced opposition from the Samyukta Kisan Morcha (SKM), they have been steadfast in their stand to punish those who have committed sacrilege. “Ever since our sect came into being, we have been called names and opposed by several persons, none of it bothers us as our job is to secure the farmers’ safety and we are all one,” he said.

Explained | Who are the Nihangs?

The SKM had distanced itself from the Nihangs and the victim, who allegedly desecrated the Sarbloh Granth, after the incident and called for a police probe into the same. Four Nihang Sikhs were arrested in the matter.

Hanuman Singh, another Nihang, said while most from their sect at Singhu were ‘chakravarty’ or those who keep moving from one place to another on their horses, this is the first time that they have stayed put at a particular place “just to support our farmer brothers and their legitimate demands”.

“Unlike others, Nihangs cannot even go back to their villages as we have to take care of our horses here. Since we have been staying here for almost a year and will continue to do so till we get a written assurance on the repeal, we ride our horses nearby every day so that they don’t fall sick or develop ailments,” he said. “There are around 250 horses at Singhu and it is our duty to take care of them”.

Paramjeet Kaur said that after the lynching took place, all the farmers and Nihangs had formed a combined unit and swore to punish those who disrespect their holy book. “We don’t consider ourselves as a separate sect, even we have been stationed here from the very first day and it’s a celebration for all of us. The only difference is that we are farmers’ protectors…one Nihang Sikh is equal to a lakh people,” she said.

“It is true that at that point of time everyone thought that the protest was losing its way and we developed a bad impression, but every agitation has its own supporters and detestors…PM Modi’s announcement has validated our participation and we don’t regret what happened earlier,” said Mohan Singh, another Nihang Sikh.

Sher Singh said Nihangs have been part of the protest for the sole reason of acting as the first line of defence against any anti-social elements who might derail the protest. “We aren’t politicians and we don’t intend to become them, but farmers have played a huge role in shaping Nihangs and their journey…they provide us with food and ration during our journey to different places, we are simply doing our duty,” he said.

“Everyone is scared of us, especially after the incident, but it’s our job to take action against someone who breaches our rules and even farmers support us in this.”