Will continue tour of State after Council polls: Yediyurappa 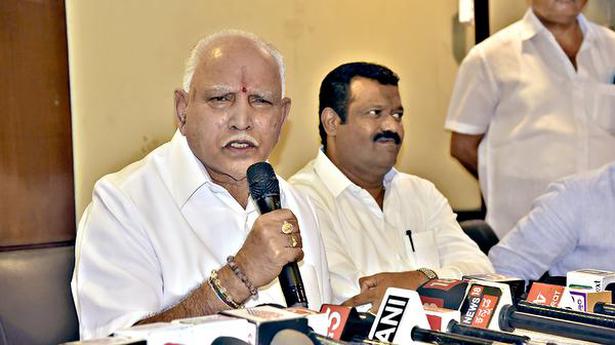 Former Chief Minister B.S. Yediyurappa has said that even after the Legislative Council polls, he would be touring the State and would stay for a day in each district for strengthening the party.

Addressing presspersons in Hubbballi on Friday, Mr. Yediyurappa said that the Jan Swaraj Yatra of the party had been organised not just keeping in mind the Council elections but also for reaching out to the people, particularly farmers whose life had been affected badly owing to the natural calamities.

The former Chief Minister said that the workers who would assemble for the yatra would be asked to go to the people to hear their grievances and also assist in resolving the issues.

“Because of the continuous rainfall, the lives of the farmers have been affected badly. Large-scale crop loss has been reported across the State. Our Government will take steps to disburse compensation to them on a war footing,” he said.

To a query, Mr. Yediyurappa said that nobody had tied his hands nor was he being sidelined. “I will be touring the State and indulging in organisational activities in the days to come. My objective will be to further strengthen the party and win 140-plus seats for the party in the next Assembly elections,” he said.

He said that BJP would win at least 18 out of the 20 Council seats it was contesting. He said that the core committee had taken a decision to contest only in one seat in dual–member constituencies.

“The decision has been taken after due deliberations and the names of the candidates will be announced within a couple of days. In fact the party workers know who the candidates are and they have already started working for the party candidates,” he said.

Mr. Yediyurappa said that already BJP had won in the Uttar Pradesh Assembly elections and only a formality was required to be completed. He said in Uttar Pradesh, Chief Minister Yogi Adiytanath had done tremendous work based on which the party would come back to power.

The repeal of farm laws by the Union Government would not make any impact on the U.P. elections and also the decision had nothing to do with the debacle in byelections in various States.