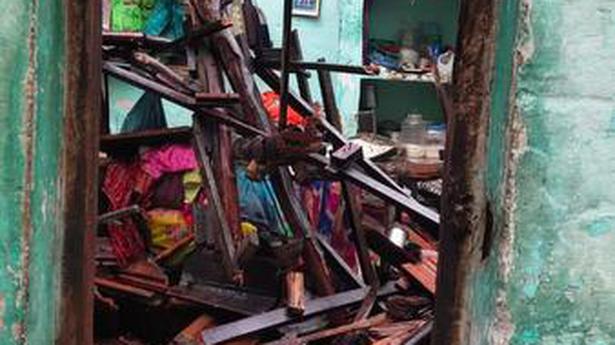 District Collector S. Nagalakshmi reviewed the situation with Revenue and Irrigation Department officials and ordered that necessary relief and rehabilitation measures be taken.

A youth died and three others were injured in three incidents of house collapse as there were incessant rains in Anantapur district during the last 36 hours.

The cyclonic storm that turned into a depression and crossed over from the Bay of Bengal to land at 5.30 a.m. on Friday, lay centered over Chittoor district and due to its pull effect, heavy rains were witnessed all over Anantapur district and southern parts of Kurnool.

A youth identified as Ranjith died in Ganthumarri village in Ramagiri Mandal, when the house collapsed while he was asleep.

A tiled house collapsed in the early hours in Anantapur city due to the incessant rains and an old woman was injured. Anasuyamma, 62, was asleep when the tiled roof of her house in Raninagar in Anantapur caved in on her. She suffered injuries and was shifted to hospital.

In a similar incident, a mother and son duo Lakshmamma and Nagendra were injured at Kadavakallu village in Putlur Mandal when their house collapsed.

The Fire Department and Police personnel rescued four passengers from a car at Veldurthi village in Chennekothapalli Mandal in the district when the vehicle got stuck in the middle of a rapid flow of a stream. An earth-mover that was deployed to rescue the car inmates also got stuck.

Several streets in Kadiri town witnessed heavy flow of rainwater and people could not come out of their houses. Water was flowing in the Kadiri Narasimha Swamy temple also.

Communication between Anantapur and Kadapa districts also got snapped as streams were overflowing at several places on the State Highways. The approach roads to and from Kadiri in all directions were cut off at several places.

Water was flowing at brim level in all HLC and HNSS canals as rainwater entered the canals. The HNSS canal was on the verge of breach in the Kadiri and Madakasira branch canal areas.

District Collector S. Nagalakshmi reviewed the situation with Revenue and Irrigation Department officials on Friday morning and ordered that necessary relief and rehabilitation measures be taken.