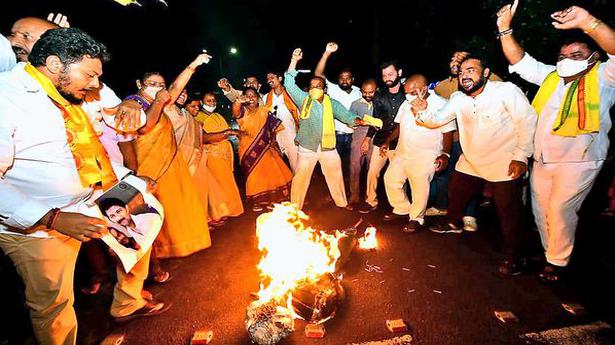 The Telugu Desam Party(TDP) activists staged protests here on Friday after party national president N. Chandrababu Naidu broke into tears and walked out of the Assembly after alleged remarks made against his wife by the YSR Congress Party members in the State Assembly in the afternoon.

Mr. Satyanarayana Murthy criticised Minister Kodali Nani and MLA Ambati Rambabu on the issue. He questioned what the senior Ministers and MLAs were doing when such derogatory statements were being made against women.

Earlier, addressing a press conference at the party office, Ms. Anitha accused the YSR Congress Party MLAs for character assassination of family members of TDP president N Chandrababu Naidu. She said that this is what happens when ‘rowdy elements’ become MLAs and sit in the Assembly. She said that the YSRCP leaders tried to divert the attention by making derogatory statements against Mr. Naidu’s family, when the TDP was questioning issues in the murder case of Y.S. Vivekananda Reddy. The TDP leader also said that people from Andhra Pradesh have understood that when they question the atrocities of the ruling party, the YSRCP would target families.

She also questioned the Director General of Police (DGP)’s stand when the ruling party members were making abusive comments against family members of the opposition party. She asked what were the women MLAs of the YSRCP doing when the MLAs were commenting against women.