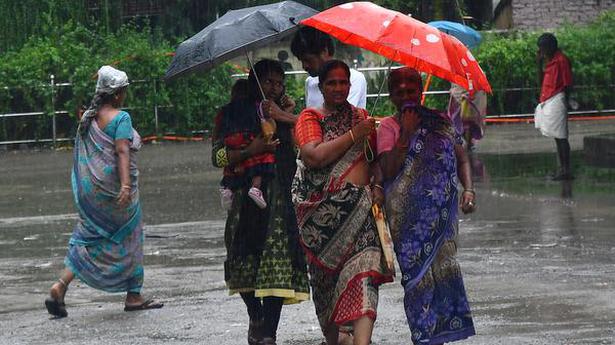 Intermittent rain lashed many places in and around Chennai on November 18 as the depression over the southwest Bay of Bengal moved closer inland. The IMD withdrew the red alert for Chennai and surrounding districts as there were slim chances of extremely heavy rain. However, an orange alert, indicating heavy to very heavy rain, has been issued for Chennai and neighbouring districts as the system may cross between Puducherry and Chennai in the early hours of November 19.

The Union government has directed an inter-Ministerial Central team to visit Tamil Nadu and ascertain whether floods in the State can be considered to be of a ‘severe nature’ and make final recommendations for additional Central assistance to the State.

Here are the latest updates:

Rains pounded parts of Puducherry and Cuddalore during the time of crossing. Puducherry received a very heavy rainfall of 19 cm; Cuddalore (14 cm); Ranipet (11cm) and Tiruvannamalai (10 cm), Krishnagiri (8 cm) too recorded heavy rains till 6 am.

In Chennai, Meenambakkam and Nungambakkam received moderate rains of 5 cm and 4 cm respectively till Friday morning.

The depression over southwest Bay of Bengal crossed north Tamilnadu and south Andhra Pradesh coasts between Puducherry and Chennai between 3 a.m.-4 a.m. on Friday.

S.Balachandran, Deputy Director General of Meteorology, Chennai, said the weather system began crossing the coast around 1.30 a.m. on Friday and completely crossed by 4 a.m. It now lies over north Tamil Nadu. It may move further west-northwestwards and weaken gradually.

No respite from rains; yellow alert issued in Bengaluru

Citizens are unlikely to get respite from heavy rains that lashed Bengaluru on November 18. The India Meteorological Department, which has issued a yellow alert for the city for November 19, attributed the rains to the low pressure over Bay of Bengal developing into a depression.

Until 8.30 p.m. on Nov. 18, the city recorded 37 mm of rain and HAL 39.2 mm. The IMD had also issued an orange alert for the day. According to @Bnglrweatherman, this month is already the wettest November in the last six years with the city receiving 115.8 mm rains (till November 14).

Heavy rain lashed all the 66 mandals in Chittoor district on Thursday, recording a rainfall of 2,218.8 mm. Tirupati Urban mandal received 88.8 mm rainfall, the highest in the district, while Gudupalle mandal received the least (8.2 mm) by Thursday morning.

The district adminsitration has put the officials on high alert for the next 20 hours in view of the forecast that the well-marked low pressure area over the Bay of Bengal off north Tamil Nadu-south Andhra Pradesh coasts with an associated cyclonic circulation is likely to intensify into a depression in the next 12 hours.

District Collectors of Vellore, Tiruvannamalai and Ranipet have issued flood alerts to 40 low-lying villages after release of water from reservoirs in these districts due to continuous rain on Thursday. A special desk with helpline numbers (0416-2258016; 7397389320; 7397392686; 7397397672) was set up at the Collectorate and Corporation headquarters in Vellore on Thursday for rain-related complaints. All schools and colleges will remain closed on Friday.

High wave/ocean state warning/alert has been issued for Tamil Nadu and Andhra Pradesh in view of the depression over southwest Bay of Bengal off north Tamil Nadu coast that moved west-northwestwards with a speed of 23 kmph during past three hours and lay centred about 250 km south-southeast of Chennai, 220 km east-southeast of Puducherry and 210 km east- northeast of Karaikal.