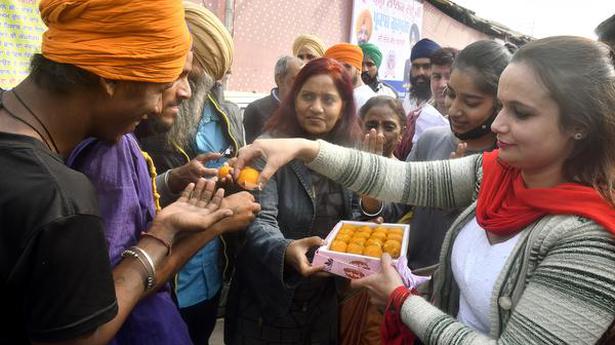 Accusing the Narendra Modi government of deciding to repeal the three farm laws because of impending Assembly elections in five States, including Punjab and Uttar Pradesh, the Congress on Friday decided to observe November 20 as “Kisan Vijay Diwas” to celebrate the victory of the farmers.

While congratulating the farmers for forcing the government to accept their demands after a year, the party credited former Congress chief Rahul Gandhi with leading a “united Opposition in the uncompromising year-long fight” against the Modi government.

The Congress and the Left parties also raised the issue of compensating the families of over 700 farmers who died during the year-long agitation.

In a statement, Congress president Sonia Gandhi said the government and citizens need to think “how farming can be made profitable in the true sense and how farmers get a fair price for their crop by way of minimum support price (MSP)”.

“Today, the anti-farmer, anti-labourer conspiracy hatched by the people in power has also been defeated, and the arrogance of the dictatorial rulers too. Today, the conspiracy to attack livelihood and farming also stands defeated,” Ms. Gandhi said.

She also stressed the need to have consultations with stakeholders and Opposition parties before taking any key decision.

Taken by surprise by the sudden announcement, the Congress and Mr. Gandhi, who had made the farm law protests the centrepiece of their politics until now, tweaked the strategy.

In an open letter to farmers, Mr. Gandhi complimented the farmers for “forcing a dictatorial ruler to shed his arrogance through Gandhian non-violent ways,” but claimed that the fight was not over yet.

He said the Congress would stand shoulder to shoulder with the farmers in the future as well in their demand for MSP, rollback of decisions regarding electricity usage in the farm sector, reduction in taxes on agricultural implements and lowering of diesel prices.

Mr. Gandhi also tweeted a video clip of his press interaction on January 14 in which he said, “Mark my words, the Govt. will have to take back the anti-farm laws”.

Party general secretary (organisation) K.C. Venugopal also urged his party colleagues to “mark the victory of the farmer’s struggle by visiting families of shaheed (martyr) farmers in our areas” and question the government for “the delay in the repeal that led to the sacrifice of over 700 precious lives of our farmers”.

“What cannot be achieved by democratic protests can be achieved by the fear of impending elections! PM’s announcement on the withdrawal of the three farm laws is not inspired by a change of policy or a change of heart. It is impelled by fear of elections!” former Union Minister P. Chidamabaram tweeted.

Asking the Prime Minister to apologise for causing all the hardship to farmers, CPI(M) general secretary Sitaram Yechury tweeted, “Parliament, while repealing the black farm laws, must enact legal entitlement to sell at MSP”.

CPI general secretary D. Raja said, “Prime Minister should answer why it took so long to repeal, claiming the lives of more than 600 farmers and led to the brutality of Lakhimpur Kheri”.

“The Government must realise that enacting important laws in a hurry, bypassing parliamentary scrutiny and excluding stakeholders from consultations, results in confrontation and conflict,” senior Congress leader Anand Sharma said, adding the government must refer all important bills to Parliamentary standing or select committees to build a national consensus.

Congress’s chief spokesperson Randeep Surjewala claimed that the decision to repeal the laws was an admission of having committed a sin and “people will decide the punishment in elections”.

Referring to setbacks the ruling party suffered in the recent bypolls, Mr. Surjewala said, “The nation wins in BJP’s defeat”.