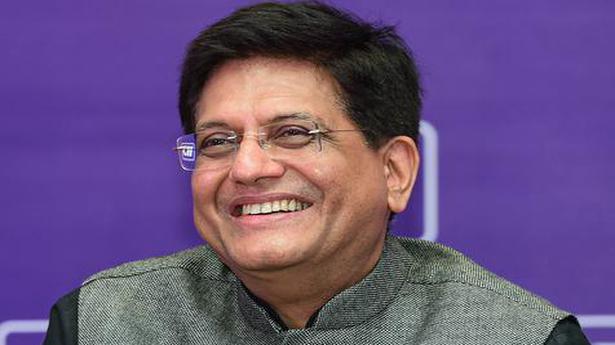 Commerce and Industry Minister calls for a reboot of the way the world body goes about its business to deal with such situations.

Ahead of the World Trade Organisation (WTO) ministerial meet beginning later this month, Commerce and Industry Minister Piyush Goyal on Thursday hit out at countries not working transparently as per global trading rules, without naming China, and called for a reboot of the way the world body goes about its business to deal with such situations.

Taking on the developed nations for seeking to treat countries with low per capita incomes on a par with far richer nations, Mr. Goyal urged them to introspect on whether they were letting the least developed and developing nations down on trade, sustainability as well as climate change goals.

“The world today has to reassess whether countries across the world are truly and genuinely following the multilateral rules in terms of transparency, fair play and honest business practices,” he noted and stressed that the WTO should reassess the way it had been conducting its affairs.

India, in contrast, was ‘proud of following the rules to the tee’ with everything done transparently in the public domain, he stated. “…So much so that our system allows for anyone to pay just Rs 10 to take out any file from the government system [as] our Right to Information laws are so strong,” he pointed out.

Mr. Goyal was responding to a query from New Zealand’s High Commissioner to India David Pyne on the changes needed in the global trade rules regime. He said New Zealand wanted India to join the Regional Comprehensive Economic Partnership (RCEP) but it was an ‘agreement between two unequals’.

“We are looking at a transparent, honest trading system in India and entering into an agreement with certain geographies that don’t share information, don’t give market access to everybody equitably and openly, where there are hidden subsidies about which I never get to act because I don’t have the information, where you ask for data but you never get the data,” Mr. Goyal said alluding to China, a key member of the RCEP.

“Our pharma industry has been trying for four years but not getting market access. And here, in India, we open up 100% automatic approval, anybody can come invest and buy our companies,” he observed at the Global Economic summit hosted by the Confederation of Indian Industry.

While reforming the WTO was critical to check such countries’ flagrant violation of trade rules, any talk about these changes triggered the developed world into ‘immediately’ seeking reforms related to whether Special and Differential Treatment trade benefits for the less developed and developing countries should continue.

“I think it is so unfair. I can understand a discussion on which countries should be considered developing and which should now be considered developed. But to deprive countries of differentiated treatment in their business practices when they are at levels of $1000, $600 to $3,000 per capita income, and putting them on the same benchmark as a country that makes 60,000$ or 80,000$ per capita, is grossly unfair,” he asserted and urged the developed world to ‘look at their priorities’.

The developed countries make ‘great noise’ about sustainable development goals and climate change goals but they were not doing enough in terms of helping the less developed word to meet their obligations, while developing their economies and meeting the aspirations of billions, Mr. Goyal emphasised.

“A young boy, in a remote village in India’s interiors, today also sees Sydney, Brisbane or Dunedin, through TV and the Internet. Does he not have aspirations? Does he not have desires to have all those goodies? Does he not as a human being have a right to those goodies. I would request the developed countries to introspect on what they have done for the rest of the world,” he remarked.

Mr. Goyal is India’s Sherpa for the G20 and will lead its delegation to the WTO Ministerial Council meeting in Geneva between November 30 and December 3.