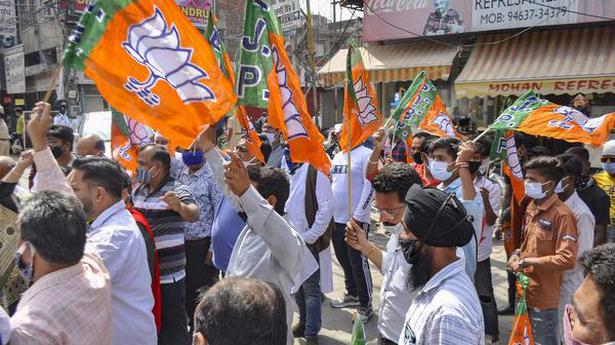 We will romp home as other parties are bereft of vision to lead State to prosperity, it says

The Bharatiya Janata Party on Wednesday sounded the poll bugle for the Assembly elections in Punjab, due early next year, announcing its plan to reach voters with the slogan “Nawan Punjab – BJP de naal” (New Punjab with BJP).

Launching the campaign, Union Minister and election in-charge of Punjab Gajinder Singh Shekhawat announced that the party would contest all 117 seats and asserted that it would create history by forming the next government.

Political recognition to every segment

Mr. Shekhawat said the BJP will give due political recognition to every segment of society and hit out at the Congress, the Shiromani Akali Dal and the Aam Aadmi Party accusing them of ignoring the State and its people’s interests over the years.

“The three parties are completely bereft of any vision to lead the State to prosperity. The people of Punjab are disgruntled with the miserable performance of these parties and they will evict them. We will go the people with an agenda of bringing prosperity and opportunity for everyone.”

Mr. Shekhawat said the BJP in the last seven years has delivered justice to the Sikhs who suffered in the 1984 riots. “The Kartarpur corridor was opened at the initiative of Prime Minister Narendra Modi. Goods and Services Tax (GST) has been removed from ‘langar’ [community kitchen]. The BJP Government granted Foreign Contribution Regulation Act (FCRA) registration to Gurdwara Harmandir Sahib [Golden Temple] enabling it to receive foreign donations, besides setting up AIIMS in Bathinda and IIM in Amritsar and numerous infrastructure development projects,” he said.

Also Read: Comment | The only way to halt the BJP juggernaut

On the issue of farmers’ agitation against farm laws, the Union Minister said 11 rounds of talks have so far been conducted with the unions and the Government took the extra step of stalling the laws for 18 months. “Our initiative to address the issue can never be doubted. Our doors are always open.”

On the Centre’s notification extending the jurisdiction of the Border Security Force (BSF) from 15 km to 50 km along the international border, Mr. Shekhawat said national security can never be compromised and the incidents of drug smuggling and drones carrying weapons had increased manifold.

“Former Chief Minister Amarinder Singh had raised this pertinent issue [drug smuggling and drones] with Home Minister Amit Shah several times and even Chief Minister Charanjit Singh Channi had recently brought up this issue with the Home Minister. The special session of the Assembly, which has been summoned on November 8 on the issue, is nothing but a strategy to divert the people’s atention from the failures of the Congress Government and the good governance of the BJP at the Centre,” he said.