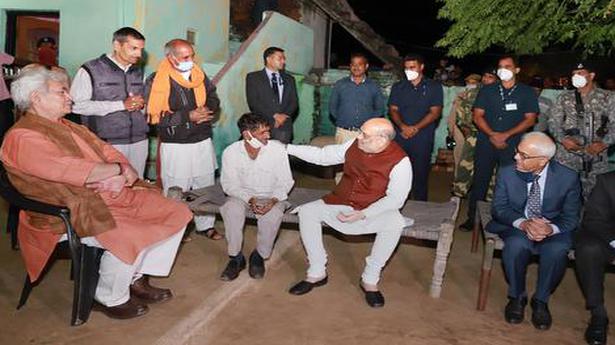 A BJP-led delegation of three displaced Kashmiri Pandit organisations called on Union Home Minister Amit Shah on Sunday and demanded the construction of two-bedroom quarters for the migrant employees from the community recruited under the Prime Minister’s special recruitment programme in the Kashmir valley, besides security and an insurance coverage for them.

They also demanded the constitution of an apex committee and a welfare board for the displaced people.

They demanded security for the non-migrant Kashmiri Pandit employees in the valley, transfer of such employees from far-flung areas to nearby safe areas and a comprehensive insurance package for them.

Nearly 3,000 Kashmiri Pandit employees recruited under the Prime Minister’s special recruitment package have been appointed in the valley since 2010.

The delegation also demanded security to temples, distress sale of land and the setting up of a welfare board for Kashmir Pandits, the officials said.

It demanded the formation of an advisory council of Kashmiri Pandits to work under the Ministry of Home Afffairs to come up with a plan for full restorative justice for the community.

The delegation requested Mr. Shah to accept the community’s demand for a single comprehensive rehabilitation plan, including employment and other rights, as enshrined in the Constitution, as well as restoration and rebuilding of temples, shrines and community assets, including crematoriums.

Mr. Shah also met the wife and the brother of Deepak Chand, a teacher who was killed by terrorists in Srinagar recently.

He conveyed his condolences to them and assured them of all possible support from the Centre.

The Union Home Minister also met delegations of the Gujjar-Bakarwal and Pahadi communities.