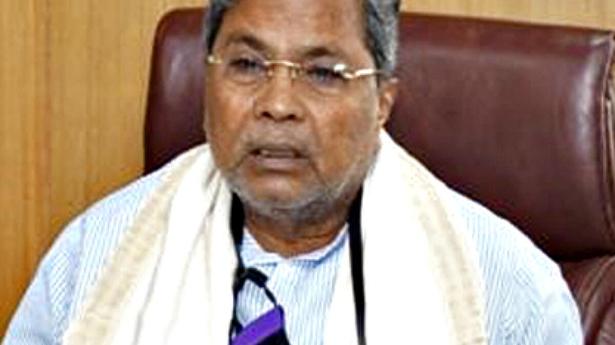 “Thanks to Modi, India has now fallen to 101st position in Global Hunger Index,” said Leader of Opposition Siddaramaiah.

Speaking to mediapersons at Hubballi airport on October 16, Mr. Siddaramaiah sought to know where were the ‘achche din’ promised by Prime Minister Narendra Modi. “He had promised progress and heaven. Now, people are starving,” he said.

On former Chief Minister H.D. Kumaraswamy’s statement that ‘Anna Bhagya’ scheme had made people lazy, he said that only those who had their stomach full would make such remarks. “Those who are starving will never make this comment. Let the poor say it. Will they say they don’t want rice?”

Reacting to former Minister C.M. Ibrahim’s statement that minority leaders were not being given positions in Congress, he sought to know who made him MLC. “Ibrahim, Rizwan, Zameer all share a good rapport with me. If I happen to meet Mr. Ibrahim, I will tell him to read about Tipu Sultan. It is not right to oppose Tipu Jayanti now,” he said.

On bypolls, he said there was a congenial atmosphere for Congress in both Hangal and Sindgi.

‘Not surprised by CM praising RSS’

Mr. Siddaramaiah said it was inevitable for Chief Minister Basavaraj Bommai to praise RSS in order to save his chair although neither him nor his father had any allegiance to RSS.

On the race for chief ministerial candidate in Congress, he said he would have no qualms if a Muslim or a Dalit was made chief minister after the party came to power as the matter was at the discretion of the party high command.