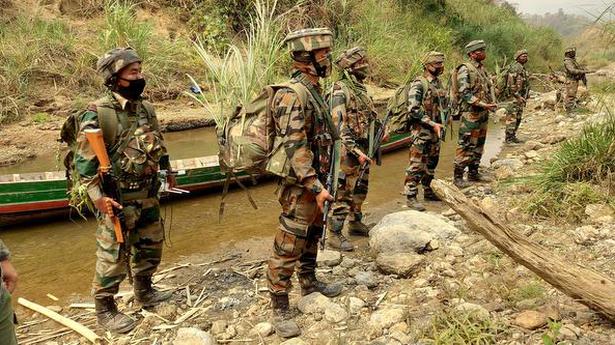 All the three militants apprehended are residents of Myanmar and they sneaked into the Indian side with the purpose of carrying out a string of attacks, they said

Three hardcore militants of the banned NSCN-K(YA) outfit were nabbed from Mon town of Nagaland in an intelligence-led counter-insurgency operation by the Assam Rifles after the ultras crossed over to India from Myanmar, sources in the security establishment said on October 14.

All the three militants apprehended are residents of Myanmar and they sneaked into the Indian side with the purpose of carrying out a string of attacks, they said.

The militants identified as Yunah Konyak, Tonpho Konyak alias Aton and Songam Konyak were caught by troops of the 35 Assam Rifles in the operation on October 11 in the border town with support from local police, the sources said.

While Yunah is a resident of Thela village in Myanmar, Tonpho is from Kamka village and Songam is from the Langkho area of the neighbouring country, they said.

The Indian and Myanmarese security forces have been coordinating with each other in keeping a strict vigil over the India-Myanmar border.

It is learnt that the overall coordination and cooperation between the India and Myanmarese armies on the management of the Indo-Myanmar border has improved following the visit by the Chief of Army Staff.

Myanmar is one of India’s strategic neighbours and shares a 1,640-km-long border with a number of northeastern states including militancy-hit Nagaland and Manipur.

The NSCN (Khaplang) and several other Naga militant groups have been demanding the establishment of a ‘Greater Nagaland’ comprising all the Naga-inhabited areas of neighbouring Assam, Manipur and Arunachal Pradesh.

India has been concerned over some militant groups from the Northeast region taking shelter in Myanmar.

The country has been assuring India that it would not allow any insurgent group to use its territory against India.