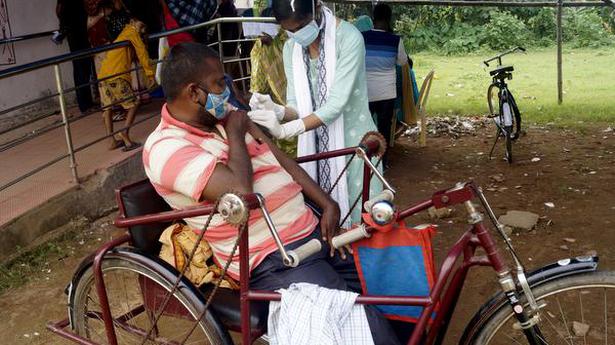 Mixing booster doses of COVID-19 vaccines currently authorized in the United States was found to be safe in adults, a study by the National Institutes of Health showed on October 13.

Russia is ready to provide up to 300 million doses of its Sputnik V vaccine to the UN-backed COVAX initiative, a top Russian official promoting the shot says, even though the World Health Organization hasn’t yet signed off on it and production issues have fanned customers’ concerns worldwide.

You can track coronavirus cases, deaths and testing rates at the national and State levels here. A list of State Helpline numbers is available as well.

Here are the latest updates:

Russia on Thursday recorded the highest daily numbers of coronavirus infections and deaths since the start of the pandemic, a rapidly surging toll that has severely strained the nation’s health care system.

The country has repeatedly marked record daily death tolls over the past few weeks as infections surged amid a slow vaccination rate and lax enforcement of measures to protect against the coronavirus.

Prime Minister Mikhail Mishustin said Tuesday that about 43 million Russians, or just about 29% of the country’s nearly 146 million people, were fully vaccinated.

Russian President Vladimir Putin has emphasized the need to speed up the vaccination rate, but he also has cautioned against forcing people to get vaccine shots. – AP

China warns against ‘manipulation’ of WHO virus probe

China’s Foreign Ministry on Thursday warned against what it called possible “political manipulation” of a renewed probe by the World Health Organization (WHO) into the origins of the coronavirus, while saying it would support the international body’s efforts.

The WHO on Wednesday released a proposed list of 25 experts to advise it on next steps in the search for the virus’ origins after its earlier efforts were attacked for going too easy on China, where the first human cases were detected in late 2019. – AP

Further relaxing the restrictions, the Tamil nadu government has allowed opening on nursery schools, playschools and day care from Nov 1.  Beaches will also be open for public on Sundays from next month.

Some earlier restrictions have also been relaxed starting today. Shops will be allowed to stay open till 11 pm from Oct 14. Religious places can be opened on Fridays, Saturdays and Sundays. Tuition centres and job fairs can be conducted adhereing to COVID protocols.

Isolated populations of India at higher risk of COVID-19: study

Some isolated populations of India like the Onge and Jarawa tribes of the Andaman islands have a higher genetic risk for COVID-19, according to a study led by researchers at CSIR–CCMB and BHU.

The study, published in the journal Genes and Immunity, suggests that the government should consider high priority protection and utmost care of these isolated groups, so that “we should not lose some of the living treasures of modern human evolution”. -PTI

The Indonesian resort island of Bali welcomed international travelers to its shops and white-sand beaches for the first time in more than a year on October 14 — if they’re vaccinated, test negative, hail from certain countries, quarantine and heed restrictions in public.

President Joko Widodo credited Bali’s high vaccination rate, and the country’s COVID-19 caseload has also declined considerably. Indonesia has had around 1,000 cases a day in the past week after peaking around 56,000 daily in July.

India recorded 18,987 fresh coronavirus cases, taking the infection tally to 3,40,20,730 on October 14, while the national Covid recovery rate increased to 98.07%, according to the Union Health Ministry’s data.

The daily rise in new coronavirus infections has been below 30,000 for 20 straight days and less than 50,000 daily new cases have been reported for 109 consecutive days now. -PTI

Classes I-V: Parents to be consulted before decision on reopening

Parents of lower primary students will be consulted before the State government decides to reopen schools for Classes I-V.

Sources in the Department of Public Instruction said that a section of parents, particularly those whose children are enrolled in government and aided schools, are batting for offline classes to resume. However, another section do not want to send their children to schools until they are vaccinated. “Even though we have allowed Classes VI onwards to function offline, many schools are not reopening as they have not received consent from parents to reopen. So we need to hold consultations and arrive at what is needed for both parents and school management,” an official said.

Melbourne will exit months of COVID-19 lockdown next week helped by a faster-than-expected vaccine uptake, Victoria state Premier Daniel Andrews said on October 14, ahead of schedule even though daily infections hit a record the same day.

In the worst day of an outbreak of the Delta variant coronavirus that began in early August, Victoria logged 2,297 new cases on Thursday, up from 1,571 the day before and the highest for any Australian state or territory since the pandemic began. Eleven people died, bringing the total toll in the latest outbreak to 125. -Reuters

U.S. to reopen land borders in November for fully vaccinated

The U.S. will reopen its land borders to nonessential travel next month, ending a 19-month freeze due to the COVID-19 pandemic as the country moves to require all international visitors to be vaccinated against the coronavirus.

Vehicle, rail and ferry travel between the U.S. and Canada and Mexico has been largely restricted to essential travel, such as trade, since the earliest days of the pandemic. The new rules, announced October 13, will allow fully vaccinated foreign nationals to enter the U.S. regardless of the reason for travel starting in early November, when a similar easing of restrictions is set to kick in for air travel into the country. By mid-January, even essential travelers seeking to enter the U.S., like truck drivers, will need to be fully vaccinated. -AP

Australian biotech CSL said on October 14 it was committed to its agreement for the production of about 50 million doses of AstraZeneca’s COVID-19 vaccine into 2022.

The announcement came after a media report said the British drugmaker’s vaccine, Vaxzevria, will no longer be manufactured in Australia due to demand for vaccines of Pfizer and Moderna. -Reuters

U.S. Food and Drug Administration scientists said on October 13 they did not receive enough data in time to do their own analysis of Johnson & Johnson’s application for a booster dose of its COVID-19 vaccine, but the agency’s review of company studies raised some red flags.

Advisers to the FDA will meet on October 15 to assess the risks and benefits of a booster shot of J&J’s vaccine, which is currently given as a single dose. -Reuters

India has resumed a small amount of exports of COVID-19 vaccines and will increase exports significantly in the next few months as domestic stocks build up and most of its own large population is inoculated, officials said on October 13.

The Andhra Pradesh government on October 13 extended the COVID-19 curfew till October 31, but limited it to only five hours from 12 midnight.

Accordingly, the curfew will now be in force from 12 midnight to 5 am only. So far the curfew hours were 11 pm to 6 am.

The government also eased restrictions on public gatherings, including marriages, permitting a maximum of 250 persons. Previously only 100 persons were permitted in such gatherings. -PTI

The Union Housing and Urban Affairs Ministry on October 13 said that 1,183 of the 1,224 pressure swing adsorption (PSA) oxygen generation plants being funded by the PM Cares Fund have been commissioned across the country so far.

The World Health Organization (WHO) said on October 13 that its newly formed advisory group on dangerous pathogens may be “our last chance” to determine the origins of the SARS-CoV-2 virus and called for cooperation from China.

Maria van Kerkhove, WHO technical lead on COVID-19, voiced hope that there would be further WHO-led international missions to China which required its cooperation. Reports of China doing tests for antibodies present in Wuhan residents in 2019 will be “absolutely critical” to understand the virus origins, she said. -Reuters

Kerala Chief Minister Pinarayi Vijayan on October 13 said counselling sessions should be held for school and college students who may be in a particular state of mind after losing not just classes but also friends during the COVID-19 pandemic.

He said schools and colleges should have counsellors when the institutions re-open, according to an official press release. -PTI

Additional monetary relief of Rs. 5,000 per month for BPL dependent families of those succumbing to COVID-19: CM

Kerala Chief Minister Pinarayi Vijayan on October 13 said monetary relief of Rs 5,000 per month would be provided to BPL dependent families of those who died due to COVID-19, in addition to the financial assistance they are already receiving.

The CM, in a release, said the decision was taken in a Cabinet meeting, where it was also decided that the additional relief would be made available only to BPL dependents of the deceased. -PTI