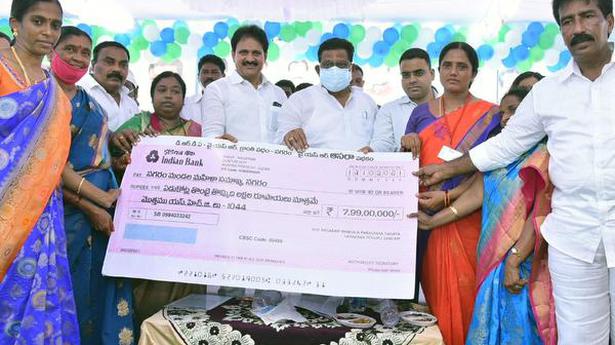 The Minister was speaking after disbursing the cheques as part of second phase of Aasara at Velagapudi Ramakrishna Memorial College in Repalle.

“The YSR Aasara scheme is intended to benefit those women who have availed themselves of loans. The waiver of loans is one of the election promises made during padayatra of Mr. Jagan. Of the ₹6,500 crore, Guntur district got ₹620.99 crore, Repalle constituency got ₹49.08 crore and Nagaram mandal got ₹7.99 crore,” said Mr. Raju.

In addition, the Pedarandariki Illu scheme was intended to build houses for 30 lakh people and Nadu-Nedu scheme has given a new facelift to schools. The YSR Arogyasri scheme was now expanded to cover 2,000 diseases and a new medical college was being constructed at every parliamentary constituency, he said.

MP Mopidevi Venkata Ramana Rao said that women had the ability to stand on their feet and were good at financial discipline. The Navaratnalu was intended to bring economic development to all sections of society.

District Collector Vivek Yadav said that ₹7.99 crore had been credited to the accounts of 1,044 SHG women. The education, health scenario was going to change rapidly after the launch of Nadu-Nedu scheme, he said.

Chairperson of Zilla Parishat Henry Christina said the schemes hadbeen launched to bring smiles on every person in the State. Later, the Minister laid the foundation stone for the village secretariat at Repalle.