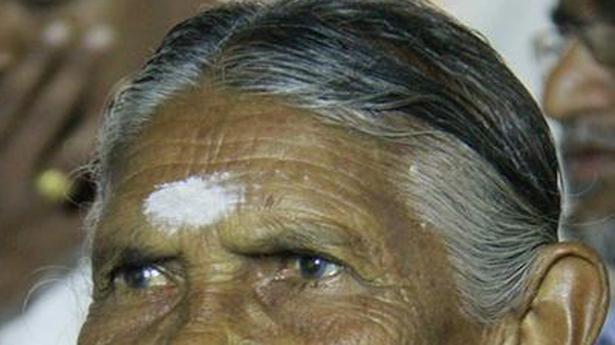 A postgraduate college girl and an octogenarian are among those who have been elected panchayat presidents in the rural local bodies polls held in nine newly carved-out districts.

When Lakshmiyur and other hamlets falling under Venkadampatti village panchayat in Kadayam union were facing a drinking water crisis a couple of years ago, Ravi Subramanian, a farmer, stepped up to the plate and supplied drinking water in his tanker. Now, his 22-year-old daughter, R. Saarukala, a postgraduate engineering student, has become the president of Venkadampatti village panchayat.

“I have personally seen people’s agonising struggle for drinking water even though we are situated close to the Gadana irrigation system. I am determined to provide a lasting solution to this problem,” she said.

When the civic polls were notified, Mr. Subramanian asked his daughter if she was interested in contesting the elections since Venkadampatti village panchayat, with 23 hamlets, was reserved for women. She instantly said yes. She bagged 3,336 of the 6,656 votes polled in a four-cornered contest. “The people backed me overwhelmingly. With the drinking water schemes being executed by the Central (Jal Jeevan) and State governments, I will provide an effective solution to the drinking water issue,” she said.

Ms. Saarukala also promised the youth of her panchayat that they would get adequate facilities to showcase their sporting skills. Her other promises include community halls, libraries, proper roads and healthcare.

Vowing to eliminate corruption, she said all the funds sanctioned for various schemes would be utilised properly. When asked if she would go back to her college to complete the second year of her postgraduate degree, Ms. Saarukala said she would get permission to do her project from her native place itself so that she could serve the people.

“I will work towards creating better basic amenities in the panchayat,” she said.