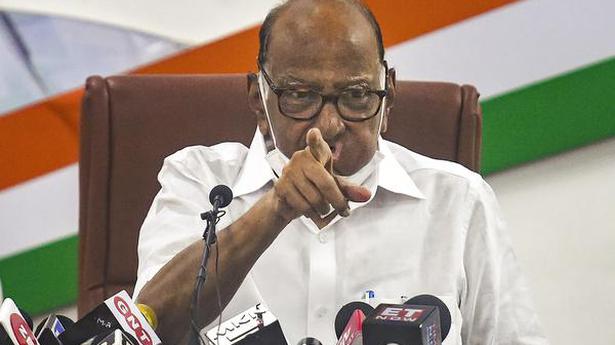 Nationalist Congress Party (NCP) chief Sharad Pawar on Wednesday launched an attack on the Union Government alleging that the Central agencies such as CBI, ED, IT and NCB are being misused for political gains.

Asked about the Income-Tax raids on establishments of those related to deputy Chief Minister and his nephew Ajit Pawar, Mr. Pawar said, “In my 56 years of political career, I have never seen an Income-Tax raid going on for six days. They were about to leave after one and half day when the officials received a call asking them to stay inside. A total of 18 officials are raiding a house of two people in Kolhapur for six days. Let them do it. This is not the time to answer anyone. We will answer it when right time comes.” The NCP chief was addressing a press conference at the part headquarters.

Asked if this is to destabilise the tripartite Maha Vikas Aghadi (MVA) government which will soon be completing two years in office, Mr. Pawar said we do not come to power to give it up. “Don’t talk about two years. We are here to stay for five years,” he said.

The former Union Minister claimed that agencies are being used to defame certain people. “Nawab Malik had made certain allegations against NCB officer Sameer Wankhede. When I inquired, I came to know about many stories of him as a customs officer. But I won’t talk about them as of now,” he said, taunting the BJP that the party comes to answer allegations against the NCB before the agency.

Taking the NCB head-on, Mr. Pawar said the Mumbai police’s anti-narcotics cell had seized a large quantity of drugs than the NCB.

“Former Police Commissioner of Mumbai Param Bir Singh made allegations against Anil Deshmukh, who instantly decided to resign. But now this Singh is facing several allegations himself and he is nowhere to be found. Deshmukh’s house was raided for the fifth time. This must be a record of raiding a single house,” slammed Mr. Pawar.

Thanking the people of Maharashtra for the peaceful bandh over the killings of farmers at Lakhimpur-Kheri, Mr. Pawar said the Union Minister of State for Home whose son was arrested in this case and the Chief Minister of Uttar Pradesh cannot hide themselves from the responsibility. “The MoS must resign.”

Slamming the Opposition Bharatiya Janata Party (BJP) which had raised questions on the police firing at Maval several years ago when the Congress-NCP government was in power, Mr. Pawar said the police officials were responsible for that incident and not the rulers. “The whole episode at that time was a result of explosive statements made by the BJP. But people of Maval eventually realised the mistake and now an NCP MLA won that seat with over 90,000 votes in 2019,” he said.