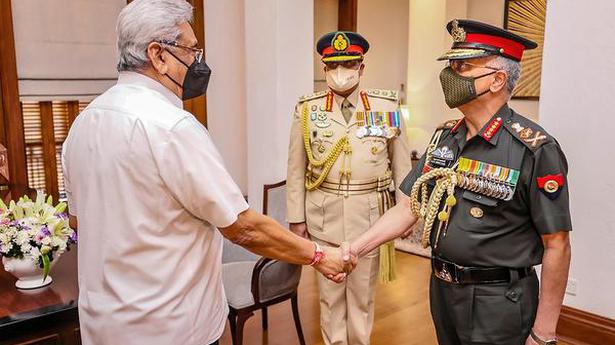 India’s strategic concerns are periodically aired in Sri Lanka, whose leaders have repeatedly assured New Delhi that no activity threatening its security would be permitted by Colombo.

In his meeting with President Gotabaya, General Naravane said India “highly expects” the stability of neighbouring countries for regional security, a statement from the President’s office said. “Reminiscing the training he received in India during his service in the Army and the experiences gained, the President commended the leadership capabilities achieved by Sri Lankan military personnel through the military training they receive in India,” the media release said.

Every year, nearly 1,000 Sri Lankan Army officers receive military training in India. In addition to that, a specially designed training course for 50 Army officers will be provided “in the near future” at the request of the Chief of Defence Staff and Commander of the Sri Lankan Army, General Shavendra Silva, the Presidential Media Division said.

The Indian Army chief’s visit coincides with ‘Mitra Shakti’, an ongoing programme for the Indian and Sri Lankan military, said to be one of the largest bilateral military exercises in the region. “During the visit, areas of mutual interest and avenues for enhancing existing bilateral defence cooperation will be discussed, with Sri Lanka being ‘Priority One’ partner of India,” a press release from the Indian High Commission said.

General Naravane called on Prime Minister Rajapaksa, who “expressed his appreciation for the assistance provided by the Indian Armed Forces to Sri Lanka throughout the years, especially in the area of training”, the Prime Minister’s office said in a statement. The two delegations discussed several areas of mutual interest, including “regional concerns of fundamentalism and terrorism, and the importance of caring for veterans after their service to the country”, the statement said.

Earlier addressing senior Sri Lankan military officials, the Indian Army chief said: “As matured democracies, the quality and interaction of elected leaders of both countries is mirrored by similar interactions between our two militaries,” while recalling his days as part of the Indian Peace Keeping Force deployed in Sri Lanka from 1987 to 1990.