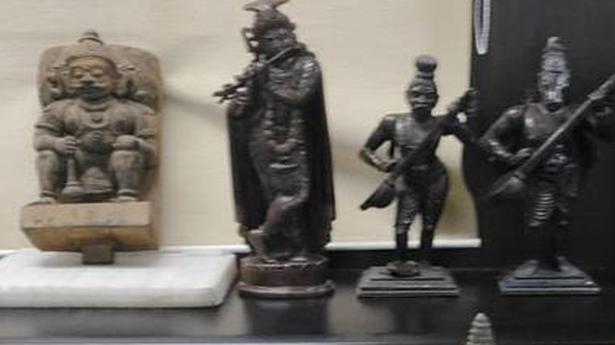 The Idol Wing CID on Wednesday seized antique idols, wooden artefacts and rare paintings from a commercial complex in the city.

On receiving information that the goods were meant for export, a special team, led by Additional Superintendent of Police P. Ashok Natarajan, conducted a search on the ground floor of the commercial complex on Dr. Radhakrishnan Road, Mylapore, and found the items.

The police seized five panchaloha idols of deities including Ram, Lakshman, Sita, Hanuman and Krishna, and five wooden artefacts depicting Narada, Dwara Balagar, Nandi, Krishna and a dancing woman. Four Thanjavur paintings were also seized. They were said to belong to Rajagopalan, who lives in the U.S.

Superintendent of Police, Idol Wing CID, R. Ponni, said, “A case was registered by us in connection with the seizure. An officer has been appointed to take up further investigation.”

The investigation revealed that a few people had tried to dispatch the rare antiques through a courier firm. Since the firm demanded an antiquity certificate, the items were taken back.

Further investigation is on to trace those who attempted to send the items and ascertain whom it was meant for.

The idols, wooden artefacts and paintings would be handed over to the Additional Special Court for Idol Wing cases in Kumbakonam.