Weaning the youth from ganja 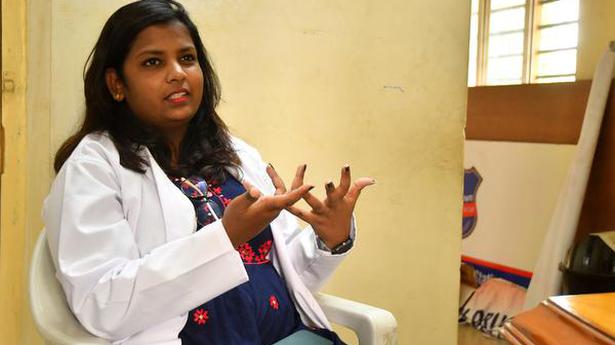 Drums load of ganja seized over the years is stored as evidence in a room at the Telangana Prohibition and Excise Station in Dhoolpet. A little away from there, another room in the station has been teeming with youngsters from the past few weeks on most afternoons. All of them are explained about the “after party” effects — dangerous consequences of smoking ganja.

The Dhoolpet Excise officials, through Nasha Mukt Bharat campaign, have temporarily recruited a clinical psychologist who explains the youngsters how smoking ganja saps motivation to take up various activities in life, their chances of becoming infertile or how the substance affects potency, and how it can lead to delusions, paranoia etc.

Some of them experiencing the physiological effects have sought help from the officials and the psychologist. Youngsters pay more attention when it comes to the effects on potency, a drop in focus levels.

From September of this year, the Excise department officials in collaboration with the State Police department have intensified efforts to apprehend people who transport and peddle ganja. Besides them, consumers who try to buy ganja in the Dhoolpet limits too are caught. A little over 410 youngsters were caught from September 21 to October 12, said K Naveen Kumar, Superintendent, Dhoolpet Excise Station. Most of them were in the 18-25 age group.

After landing in their dragnet, the youngsters are counselled about the consequences of getting addicted to ganja. Until a few weeks, the Excise officials relied on videos and other material to counsel — which was loaded with emotional aspects. From the past two weeks, a clinical psychologist has been tasked with the job.

“Now we have a clinical psychologist who explains in detail about how ganja consumption effects various parts of the body, brain. Parents too are called to attend the counselling session,” said Mr Naveen Kumar. The Clinical Psychologist is Rachel Nandi.

“I explain them how its consumption can effect their academics, social life, work productivity. Increase in tolerance (quantity of ganja consumption) can impair cognitive functions such as logical thinking, judgment, concentration, problem solving abilities. Effects on fertility, and how ganja consumption can lead to hallucinations, paranoia, too are explained,” said Ms Rachel.

Since parents too are present at the sessions, the highest and swift response is from the elders who want to save their kids from the addiction. A few of the youngsters too have approached the Excise officials and the psychologists, seeking help to get out of the bait.

Ms Rachel said that they also explain how to handle the withdrawal phase, health facilities where professional help is provided. Institute of Mental Health, Eragadda, provides free of cost services at its Deaddiction Centre.

The Excise Superintendent said that they will continue to catch the transporters, peddlers, and consumers of ganja. The counselling too will continue.