Two children die in sleep as wall collapses in rain 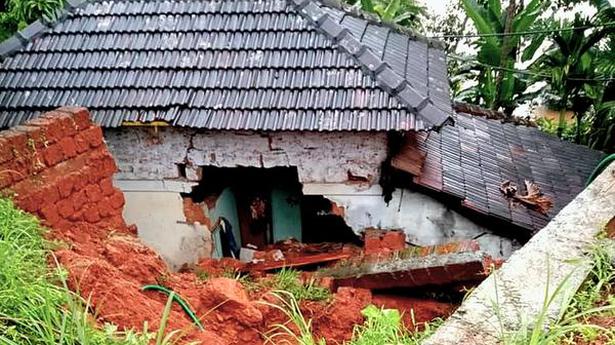 Two children were killed when a portion of their house came crashing on them in heavy rain at Karipur near Kondotty on Tuesday morning.

The tragedy took place at Mundottupadam, Karipur, at 5.15 a.m. when a mudslide occurred from a hillock behind their house, causing the wall of the bedroom in which the children were sleeping to collapse. The victims were identified as Diyana Fatima, 7, and Lubana Fatima, six months old, daughters of Aboobacker Siddik and Sumayya.

Local people came running for help, extricated the children from under the rubble, and rushed them to the Government Medical College Hospital, Kozhikode. However, they could not be saved.

Incessant rain wreaked extensive damage across the district on Tuesday. Many houses were damaged and roads were inundated. Crops worth lakhs of rupees were destroyed.

Floodwaters entered hundreds of houses across the district as the continuous downpour filled fields and canals. Rivers and streams were in full spate.

Many roads, including the National Highway 966, were submerged. However, there were no major traffic disruptions. Landslips were suspected to have occurred in the forests of Nilambur, Karuvarakundu, and Silent Valley. A bridge at Thiruvali gave in as floodwaters submerged it. Relief camps were opened in Tirur, Eranad, and Kondotty taluks.

District authorities said that the other taluks were ready to open relief camps if needed. As many as 70 evacuees were shifted to relief camps. When 13 of them were in Tirur, 54 were in Eranad and three in Kondotty.

Revenue Minister K. Rajan directed the district administration to sanction maximum financial help to the family of the two children, who died at Karipur. The Minister issued the direction at an emergency meeting on Tuesday.