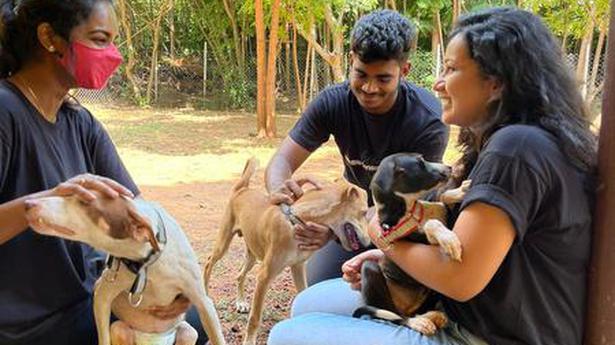 Two students of the Madras Christian College have come up with an innovative solution to tackle dog-deer conflict on campus. Their project is designed to bring revenue in the long run for the college as well.

W. Smrithi and M. Karthik, final year students of zoology department at the MCC, came up with a project as part of their course work which was then fine-tuned by the ideation centre in the college.

“The problem of dogs becomes acute between March and July when the campus has fewer people and the dogs do not find sufficient food. There are three kinds of dogs on campus — domesticated, stray and feral. The feral dogs form a pack and the strays join them. They attack deer that roam alone,” said Smrithi.

The students then approached People for Cattle in India to start anti-rabies vaccination programme for dogs on campus. On Monday, as a first measure 20 dogs were vaccinated, said Principal P. Wilson. The college also launched a wildlife conservation club.

Mr. Wilson said the students had come up with several suggestions, including setting up a clinic, grooming centre and hostel for dogs, revenue from which would be used to tend to community dogs on the campus.

Meanwhile, the two students have roped in animal loving students on campus to start feeding programmes and befriend the dogs. This would enable them geotag the animals and monitor their movement. The female of the species would be spayed to check dog population.

The statistics department had offered to use the data from the geotagging to generate information that could be used for research. The students have proposed to domesticate the community dogs and train them as guard dogs to keep away porcupines and peacocks that damage crops grown on 5 acre farm on the campus, Mr. Wilson said.

The data generated from the dog behaviour would help the institution to redesign the campus’ vegetative cover to keep deer out of dogs’ reach.