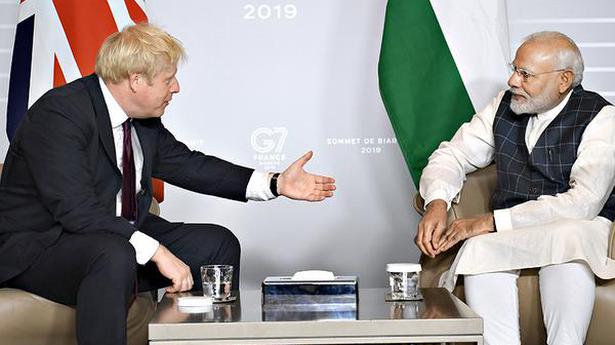 British Prime Minister Boris Johnson spoke to Prime Minister Narendra Modi on Monday, urging India to announce a “more ambitious” Nationally Determined Contribution (NDC) ahead of a United Nations climate change summit in the U.K. in a few weeks. The two leaders also spoke about the issue of vaccine certifications and the Afghanistan situation.

Army chief General Manoj Mukund Naravane will arrive in Colombo on Tuesday on a five-day goodwill visit at the invitation of his Sri Lankan counterpart Gen Shavendra Silva.

The Health Ministry says it does not know how many COVID-19 vaccines were procured by private players, nor does it have separate data on how many vaccine doses were administered by private hospitals and service providers, according to its response to a Right to Information request filed by Commodore Lokesh Batra (Retd).

The Samyukt Kisan Morcha’s deadline for its demands that Minister of State for Home Ajay Mishra be sacked and arrested for his alleged involvement in the deaths of farmers at Lakhimpur Kheri ran out on Monday. As hundreds of farmers pour into the region for the last rites of the victims on Tuesday, the protesting unions plan to go ahead with an intensified agitation including kalash yatra, rail roko and mass rally in Lucknow later this month.

The move assumes significance as it comes in the backdrop of approximately 2,990 kg of heroin seized by the Directorate of Revenue Intelligence (DRI) at the company operated Mundra port on the Gujarat coast on September 16 in a containerised cargo imported as talc from Afghanistan via Iran’s Bandar Abbas port.

Lok Sabha Speaker Om Birla has invited the Chairman of Pakistan’s Senate to attend the centennial celebration of the creation of the Public Accounts Committee of Parliament. The invite has not been confirmed by the Ministry of External Affairs yet but other informed sources told The Hindu that the August 24 letter sent to the Chairman of the Senate of Pakistan was a routine gesture as Pakistan is part of the Commonwealth and other members of the grouping are also likely to be part of the celebration.

The government on Monday issued a letter of intent (LoI) confirming the sale of its 100% stake in loss-making Air India to Tata Group for ₹18,000 crore, a senior official said. Last week, the government had accepted an offer by Talace Pvt Ltd, a unit of the holding company of salt-to-software conglomerate, to pay ₹2,700 crore in cash and takeover ₹15,300 crore of the airline’s debt.

The Bharatiya Janata Party (BJP) on Monday got into a huddle over the Uttar Pradesh Assembly elections under the shadow of the events of Lakhimpur Kheri that left eight people dead and a cloud of controversy over local BJP strongman and Minister of State for Home Ajay Kumar Mishra.

Sunil Narine gave glimpses of his ‘old mystery’ with the ball and then topped it up with three monster sixes as Kolkata Knight Riders’ four-wicket victory in an exciting ‘Eliminator’ dashed Virat Kohli’s dream of winning an IPL trophy while leading Royal Challengers Bangalore.

Describing Ashish Mishra’s three-day police custody as a “red carpet remand”, Bharatiya Kisan Union national spokesperson Rakesh Tikait said on Monday that justice would not be served until his father Minister of State for Home Affairs Ajay Mishra was dismissed from the Union Cabinet and arrested.

The bitterness between both the sons of Rashtriya Janata Dal (RJD) chief Lalu Prasad and former Bihar Chief Minister Rabri Devi escalated on Monday, with elder son Tej Pratap Yadav setting on a padyatra (foot march) from the historic Gandhi Maidan to the residence of former veteran socialist leader Jayaprakash Narayan to begin an LP (Lalu Prasad) movement a la JP movement in the State.

Industrialists told Prime Minister Narendra Modi on Monday that for the space industry to grow, the Government should help small and medium sector enterprises (SME) access more capital as well as move faster on finalising its space policy.

Warning that Afghanistan is facing “a make-or-break moment,” the United Nations chief on Monday urged the world to prevent the country’s economy from collapsing. Secretary-General Antonio Guterres also appealed to the Taliban to stop breaking its promises to allow women to work and girls to have access to all levels of education.

Germany qualified for the 2022 World Cup by crushing North Macedonia 4-0 away on Monday to secure top spot in qualifying Group J with two games to spare. A second-half double by Timo Werner and one goal each from Kai Havertz and Jamal Musiala secured Germany’s fifth win in their fifth game under new coach Hansi Flick and lifted them to 21 points, with Romania in second place on 13.