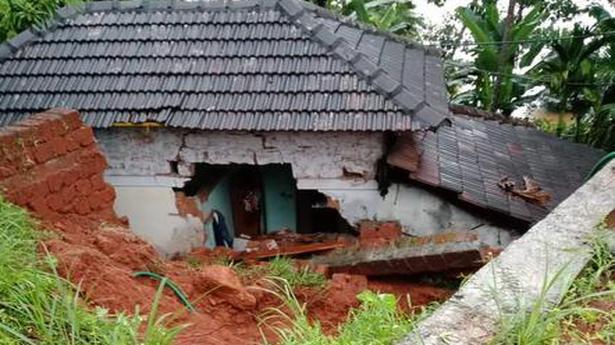 The incident took place early morning following a mudslide from a hillock behind their house, causing the bedroom in which the children were sleeping to collapse

Two children were killed when a portion of their house came crashing on them in heavy rain at Karipur near Kondotty in Malappuram district on Tuesday morning.

The incident took place at Mundottupadam, Karipur, around 5.15 a.m. following a mudslide from a hillock behind their house, causing the bedroom in which the children were sleeping to collapse.

The victims were identified as Riyana Fatima (8) and Lubana Fatima, daughters of Mohammed Kutty Chennari. Lubana was seven months old.

Local residents extricated the children from under the rubble and rushed them to Government Medical College Hospital, Kozhikode. However, their lives could not be saved.

The other members in the house escaped unhurt as they had woken up early and were getting ready for the Subah prayer in another room.

The accident shocked Karipur and neighbouring places even as the rain continued to batter the region on Tuesday morning. Several places in Malappuram district were inundated. The National Highway 966 at Kondotty and Pulikkal became submerged, even as streams, canals and rivers in Malabar were in full spate.

Landslides were suspected to have occurred in the forests of Nilambur, Karuvarakundu and Silent Valley. A bridge at Thiruvali gave in as floodwaters submerged it. The ghatt road to Attappady from Mannarkkad was blocked after several trees were uprooted. Efforts were on to clear the debris. The Mannarkkad tahsildar said that the road would be cleared before noon on Tuesday.

The Meteorological Department has sounded an orange alert for Kollam, Alappuzha, Pathanamthitta, Kottayam, Ernakulam and Idukki districts, and a yellow alert for Thrissur, Palakkad, Malappuram, Kozhikode, Wayanad, Kannur and Kasargod districts. It has predicted heavy rain for the next two days.