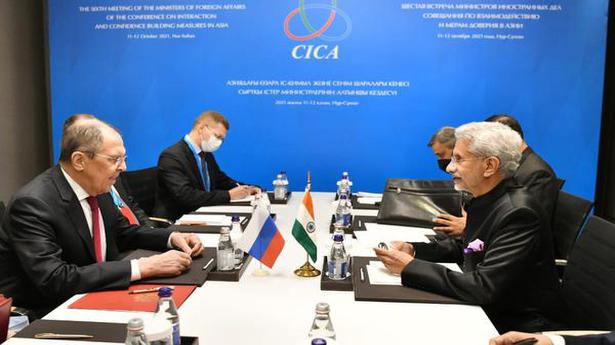 Mr. Jaishankar arrived in Kazakhstan from Kyrgyzstan on Monday on the second leg of his three-nation tour to Central Asia.

External Affairs Minister S. Jaishankar on Tuesday met his Russian counterpart Sergey Lavrov here and discussed the progress in bilateral cooperation and exchanged views on Afghanistan and the Indo-Pacific.

Mr. Jaishankar arrived in Kazakhstan from Kyrgyzstan on Monday on the second leg of his three-nation tour to Central Asia with an aim to further expand bilateral ties and discuss key regional issues, including the developments in Afghanistan after the Taliban seized control of the war-torn country after the exit of U.S. forces.

The minister met Mr. Lavrov on the sidelines of the Ministerial meeting of the Conference of Interaction and Confidence Building Measures in Asia (CICA).

“Good to catch up with Russian FM Sergey Lavrov on the sidelines of the CICA meeting in Nur-Sultan. Noted the progress in our bilateral cooperation. Exchanged notes on Afghanistan and the Indo-Pacific,” he tweeted.

In Bishkek, Mr. Jaishankar had said that India was closely following the developments in Afghanistan and underscored the importance of the Taliban regime meeting the expectations of the international community as elaborated in the UN Security Council Resolution 2593.

The UNSC resolution 2593 unequivocally demands that Afghan territory not be used for sheltering, training, planning or financing terrorist acts; and specifically refers to terrorist individuals proscribed by the UN Security Council, including Lashkar-e-Taiba and Jaish-e-Mohammad.

Mr. Lavrov, who has been openly critical of the Indo-Pacific concept, in December accused the U.S.-led West of attempting to “undermine” Moscow’s close partnership and privileged relations with India.

He has said the West is seeking to reinstate the unipolar world order that would include all states but for Russia and China with which it would deal later.

India has described the Indo-Pacific strategy as further advancement of its Act East Policy and said Russia can make its full contribution in the region.

Mr. Jaishankar also met his Mongolian counterpart and discussed with her strong development partnership between the two countries.

From Nur-Sultan, Jaishankar will travel to Armenia where he will meet his Armenian counterpart Ararat Mirzoyan and call on Prime Minister Nikol Pashinyan.