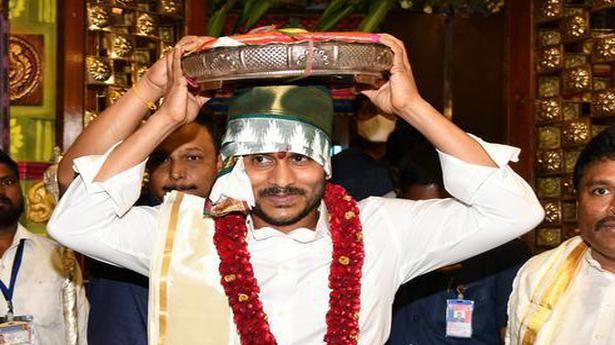 It is a practice that the Chief Minister presents the silk robes on behalf of the State government to the presiding deity on the occasion of Moola Nakshatram during the Dasara festival. The temple authorities and Vedic scholars accorded a ceremonial reception for the Chief Minister from the temple entrance.

Pradhana Archaka L. Durga Prasad, sthanacharya V. Sivaprasad tied pariveshtitham, traditional turban, over his head. Later, the priests and Vedic scholars offered him a poorna kumbha swagatham. The Chief Minister carried silk robes in a silver plate on his head and walked down to the temple.

Mr. Jagan had a darshan of the presiding deity, who was decked up as goddess Saraswathi coinciding with moola nakshatram. He offered special prayers to Goddess Durga and took blessings from the priests in the temple hall.