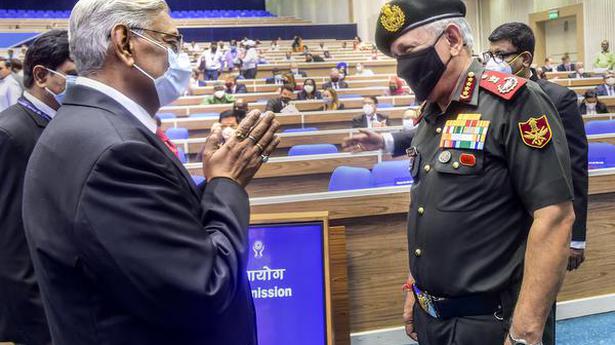 “Social service organisations and human rights defenders should strongly condemn political violence and terrorism. Apathy on this issue, engenders fundamentalism and history will never forgive us for this,” Arun Kumar Mishra said.

In his address during an event at Vigyan Bhawan to mark the foundation day of the National Human Rights Commission (NHRC), he also underlined that it has become very common for external forces to level false allegations against India of human rights violations and this should be opposed.

“India has the spirit of ‘Sarvadharma Sambhav’ (harmony of religions). Everyone has freedom to build a temple or mosque or a church. But in many countries, such liberties are not there,” the NHRC chief said.

Lamenting that humans were hell-bent on destroying humanity, he said, in the 20th century a large number of people have died due to political violence globally.

“It is unfortunate that political violence has still not stopped in the country and abroad (’Desh-videsh mey rajnaitik hinsa aaj bhi samapt nahin hui hai’),” he said.

The NHRC chairperson also said that “killers of innocent people cannot be glorified”.

“Social service organisations and human rights defenders should strongly condemn political violence and terrorism. Apathy on this issue, engenders fundamentalism and history will never forgive us for this,” Mishra said.

‘Time has come, when “we should resolutely oppose it” and at least raise a voice against this violence,’ he said.

In his speech, he also asserted that “untiring efforts” of Home Minister Shah for fostering a peaceful situation in Jammu and Kashmir, and the Northeast, has “ushered in a new age”.

“India has emerged as a powerful entity on a global level and it has got recognition as a new power, and it is to be credited to people of India, country’s constitutional system and leadership,” he added.

“The NHRC is working for the last 28 years even though in many powerful countries such institutions have not been established yet,” the rights panel chief said.

“Nearly one-sixth of the world’s population resides in India. India has a democratic system, and resolves every issue in a peaceful and legitimate way,” he said.

Mishra said the press, media and cyberspace have been given freedom in the country, which is within the obligations of constitutional duties and human responsibilities. “But no one has the freedom to destroy the prestige of the Republic’s fundamental pillar, the judiciary, through contemptuous behaviour, and neither should anyone be given this freedom,” he asserted.