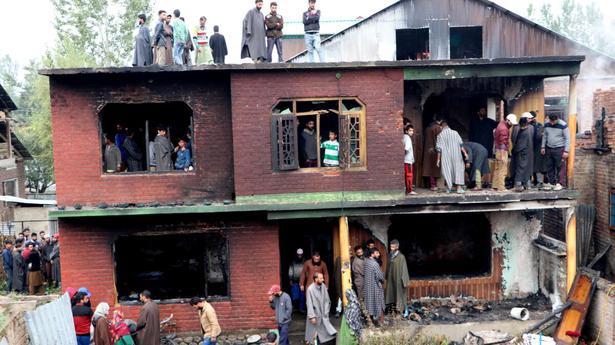 Five militants, including three affiliates of The Resistance Front (TRF) that was behind the recent civilian killings in the Valley, were killed and two multi-storey houses were damaged in multiple anti-militancy operations in south Kashmir’s Shopian on Tuesday, taking the death toll in militancy-related incidents to 12, including five soldiers, in the past 24 hours.

Also read: The Resistance Front | Faceless killers in the Valley

Three militants were killed in Shopian’s Tulran area where an anti-militancy operation was launched on Monday evening. The militants were trapped inside a residential house and refused to surrender “despite repeated offers by the security forces”.

“Out of three killed terrorists, one terrorist has been identified as Mukhtar Shah of Ganderbal, who shifted to Shopian after killing one street hawker Virendra Paswan of Bihar [last week],” Inspector General of Police Vijay Kumar said.

Two multi-storey residential houses were damaged after security forces used explosives to flush out the militants. Three cowsheds and apple boxes were also destroyed in the fire.

“The identity of the slain militants was being ascertained. The operation is on in the area,” a police spokesman said.

In the Jammu province’s Pir Panjal valley, an anti-militancy operation entered the second day on Tuesday to nab the armed militants who killed five soldiers, including a Junior Commissioned Officer, in the Poonch-Rajouri belt.

A total of 12 persons, including seven militants and five soldiers, were killed in five separate encounters in Jammu and Kashmir since Monday.

Jammu and Kashmir saw a spurt in anti-militancy operations days after militants killed seven civilians in multiple targeted attacks in the Valley.

Meanwhile, General Officer Commanding (GoC), 15 Corps, Lieutenant General D.P. Pandey, on Tuesday said he would not like to connect these operations with any of the events that took place in Srinagar or elsewhere.

However, the GoC said the civilian killings were highly condemnable. “Security forces and people need to be very careful to keep the communal harmony intact,” he added.

He said the Army was alert and ready to foil any attempt of infiltration on the Line of Control.