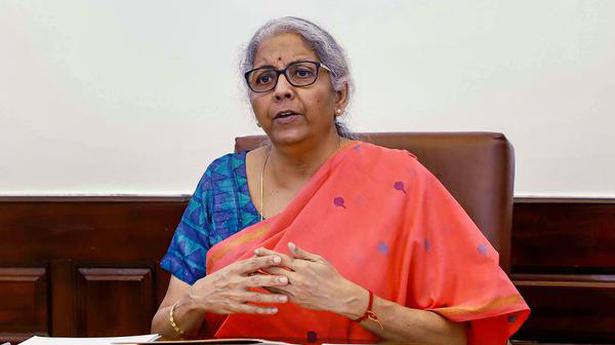 Nirmala Sitharaman arrived in the U.S. on Ocotober 11 to attend the annual meet of the World Bank and IMF in Washington as well as G20 Finance Ministers and Central Bank Governors meeting

Finance Minister Nirmala Sitharaman discussed investment opportunities, reforms in India and other related issues during her meeting with leaders of global corporations, who said they were upbeat about investing in the country.

Ms. Sitharaman arrived in the U.S. on Ocotober 11 to attend the annual meet of the World Bank and IMF in Washington as well as G20 Finance Ministers and Central Bank Governors (FMCBG) meeting.

During the official visit to the U.S., Ms. Sitharaman is expected to meet U.S. Treasury Secretary Janet Yellen.

After arriving in New York, Ms. Sitharaman travelled to Boston where she will meet investors during a roundtable hosted by FICCI and U.S.-India Strategic Partnership Forum (USISPF) and executives of global corporations and also address students at Harvard University.

Expressing their confidence in the Indian economy and the ongoing reforms, the corporate leaders said that they were upbeat about investing in the country.

Ms. Sitharaman also attended a dinner hosted by Lawrence Summers, former Treasury Secretary, along with other eminent experts in the fields of economics, public policy, finance, and development.

“The Finance Minister elucidated the intent of the country to be more inclusive in development and growth,” Mr. Singh said after his meeting with Ms. Sitharaman in Boston.

In a wide-ranging discussion with the Minister, Mr. Singh stated that some of the best science graduates and skill sets that Perkin Elmer as a company leverage, come out of India.

Mr. Singh added that amid the COVID-19 pandemic, products that have been developed in the company’s facilities in Goa are being used and exported outside the country for use for COVID-19 testing.

“So that’s really a very good example of how we can use and leverage the inclusive growth that the Finance Minister pointed out and what the country has been doing for using the capabilities and skill sets from India for our development as a company but also from the country’s perspective.” During the meeting, Ms. Sitharaman mentioned government incentives and initiatives towards promoting innovation in life sciences and research and development in the pharma sector.

Opportunities in India steering foreign collaborations and attracting Foreign Direct Investment (FDI) in the next five years under NMP through investment in strategic sectors, including telecom, formed part of discussion, the finance ministry said.

ATC, which has 76,000 towers in India, aims to expand operations in the telecommunications sector by adding another 4,000 towers.

“So we’ll make an incremental investment in the ordinary course even in the pandemic that’ll bring us to 80,000 [towers],” he said.

ATC India is among the passive telecom infrastructure providers in India and is an indirectly-held subsidiary of American Tower Corporation.

“I see that the moves that the government of India has made recently has sent a very powerful message to the world of western investors, indicating a new receptivity and a new system that I think does encourage the opportunity,” Mr. DiSantos said after his meeting with Ms. Sitharaman.

The reforms, “cast India in a very favourable light and welcoming light when it comes to bringing in investment, onboarding businesses”, Mr. DiSanto said.

Referring to his conversation with the Minister, he said India has attracted over $8 billion FDI during the pandemic.

“I do think that the policies have been pretty successful, and we welcome the kind of reforms that they’re considering making it even better to encourage investment,” he said.

During the meeting with the Minister, Mr. Ardill said that ExxonMobil is keen on playing an active role in raising the share of natural gas in the overall energy mix of India. ExxonMobil is very excited about the Prime Minister’s vision of energy independence for India.

Reforms in India have been great for investment purposes, he said.

ExxonMobil is looking forward to contributing towards decarbonising the energy system as well as use of Hydrogen as a substitute, Mr. Ardill said.

Peter Lavoy, senior director, Asia Pacific, international government relations at ExxonMobil, said that India is experiencing another energy transition and has to still get affordable, accessible, secure energy in the hands of its population that may sometimes not have electricity.

“So it has that energy transition as well as the energy transition of getting cleaner sources of energy. I think the Prime Minister’s objective, the target he set at the Independence Day speech of making India energy independent by 2047, is exactly the right target for energy security. And companies like ExxonMobil are looking forward to working with India to find cleaner sources of energy to help meet that objective,” he said.

Appreciating the friendly business atmosphere in India, Mr. Connaughton told the Finance Minister that he is upbeat about investment in India.

Mr. Connaughton said that “whenever you see the kinds of reforms that we’re seeing in India, and we’ve been there for almost over a dozen years, it really allows us to accelerate our investment activity, particularly across the broader sectors that we participate in”, such as banking, outsourcing and pharmaceuticals.

Mr. Connaughton said the ability to reform all those industries that the government is now reforming “allows us to participate in a broader way” and “we’re looking forward to investing even more. We’ve invested $5 billion already and we see it accelerating”. Mr. Pagliuca added that Bain Capital has invested over $5 billion in a dozen companies and “had great success in India. And I think the next decade will be very important for both countries to work together to build businesses on a global basis and really increase the GDP of both countries.” Ms. Sitharaman spoke about exploring opportunities in Gift City in Gujarat and other opportunities in infrastructure in India, the Finance Ministry said.

During her visit to Boston, Ms. Sitharaman also interacted with representatives of the Indian Overseas Scholars and Students, a network of scholars, students, and young professionals from India based across the globe.