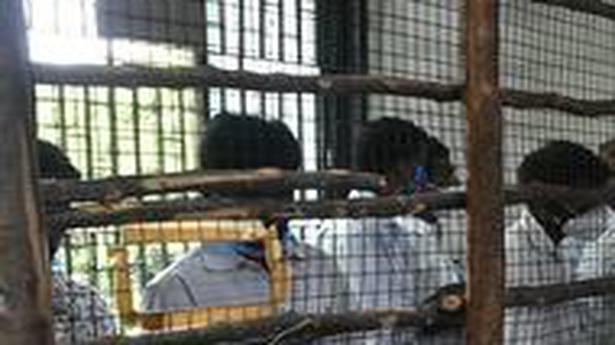 The ruling DMK is leading in the rural local bodies election in Vellore, Ranipet and Tirupattur districts with a strong margin in 70 panchayat union ward members and 22 district panchayat ward members posts as against eight wards members posts (four members in each category) by the Opposition party, AIADMK.

A total of 18,917 candidates contested for 7,251 posts, including village panchayat ward members and panchayat presidents covering a population of 20.33 lakh voters in the three districts where election was held in two phases between October 6 and 9 with a poll percentage of over 75.

“Security was tightened at the counting centres with the deployment of more police personnel and installation of CCTV cameras. Crowding was prevented near these centres, both as a security and pandemic-related measure,” said Vellore Collector P. Kumaravel Pandian.

The party cadres, local functionaries started gathering at the counting centres, as early as 8 a.m. Each counting centre covered one panchayat union where the poll was held. At present, around 20 such unions are located in these three districts.

As the poll was held for four posts, around 33,000 election officials, including 15,000 teachers, had to separate four ballot papers, making it a time consuming exercise.

Since the start of the counting of votes, the ruling DMK was on the lead in many places including Katpadi, Gudiyatham, Anaicut and Kaniyambadi in Vellore, Arcot, Walajah, Arakkonam and Kaveripakkam in Ranipet district and in Tirupattur. The main opposition party, AIADMK, was leading in two wards each in Gudiyatham and Anaicut in Vellore.

Alongside, results were declared for more than 100 village panchayat ward members and panchayat presidents in these districts. “Going alone in the poll has its merits and demerits. More campaign by senior leaders would have helped us,” said a AIADMK local functionary in Vellore.

In the neighbouring Tiruvannamalai where elections for 35 vacant posts in various local bodies were held in 77 booths with 31,553 persons casting their votes a few days ago. On Tuesday, the DMK won Cheyyar and Pernamallur panchayat union wards with AIADMK securing Pudupalayam union ward. Six village panchayats including Arumbakkam, Potharai, Velanandal and Kottagaram in different blocks like Arani, Polur and Chengam got new presidents. New ward members for 25 villages in the district were also elected.

All three districts have announced a holiday for all schools on Tuesday as teachers were deployed on election work. Also, 422 TASMAC outlets in these districts and Tiruvannamalai were shut on Tuesday, the counting day. A total of 18,917 candidates are in the fray for 7,251 posts in the elections.