Clarity eludes on project components to go into KRMB hands 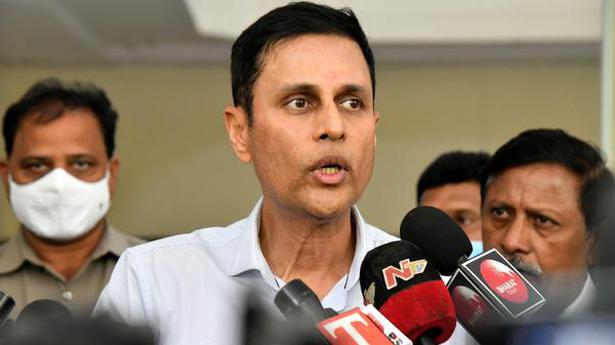 The Krishna River Management Board (KRMB) has asked Andhra Pradesh and Telangana to handover all projects, canal systems, hydel stations, barrages, pump-houses and regulators listed in Schedule 2 of the gazette notification issued on the purview of the board so that their management is taken over by it from October 14.

However, the two States are yet to give their official consent for the formal handover of the components. Sources stated that the two States are expected to give their consent for handing over at least some of the components, if not all, before or on the appointed day for the implementation of the Board’s purview, including the management of projects and their irrigation and hydel components.

The meeting chaired by KRMB Chairman M.P. Singh and attended Special Chief (Irrigation) of Telangana Rajat Kumar, Secretary (Water Resources) of AP J. Syamala Rao, engineers-in-chief C. Muralidhar (Telangana), C. Narayana Reddy (AP) and others discussed a report submitted by a sub-committee of the board comprising two each of Chief Engineers of Irrigation and Genco from the two States and five officials of the board on the project systems to be taken over initially.

The two States have also agreed to handover the detailed project reports of all projects in the Basin to the river board. Officials the two States expressed their reluctance to handover their hydel stations and schemes taken for diversion of Godavari to Krishna Basin to the board. Telangana put across its view again that hydel generation holds key in its plans to meet the needs of irrigation since it was being met mostly through lift irrigation schemes unlike AP.

Telangana reiterated that there was no need to handover the hydel stations under its control at Srisailam, Nagarjunasagar and Pulichintala since the activity was incidental to the release of water for drinking and irrigation needs and release of flood. Authorities of were of the view that hydel generation be left to the States by following the water release protocols and not resorting to generation without the board’s nod from time to time.

Further, the Telangana side is said to have reiterated before the board that unlike in the Godavari Basin there were many complexities in the Krishna Basin and in the absence of clarity on project and component-wise water allocation their management by the board would lead to more differences.

Besides, Telangana is also hopeful of the Centre’s intervention to put-off the gazette implementation at least for a few months till some contentious issues such as hydel generation, diversion schemes were sorted out, since it has made a plea to the Prime Minister, Home Minister and Jal Shakti Minister recently.