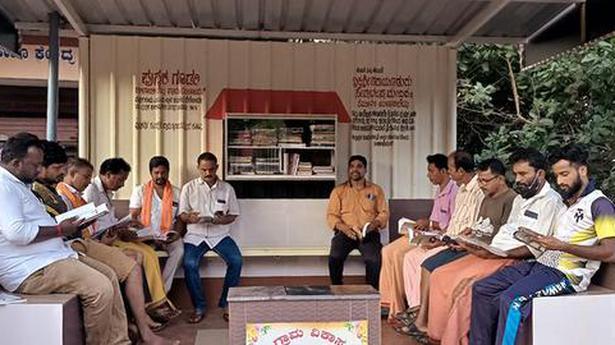 Over a week since it began, many people are seen spending time at ‘Nest of books’, adjoining the bus stand in Ulaibettu village of Mangaluru taluk, before getting into buses coming to the city.

Apart from newspapers, this nest has a collection of periodicals and short storybooks. “There is a positive response to this initiative to cultivate the habit of reading,” said panchayat president Harish Shetty.

The nest at Ulaibettu is among the book nests or ‘Pustakada Goodu’ come up in 17 gram panchayats in Dakshina Kannada since October 2. Book nests will come up in 27 mor.

Kumara, Dakshina Kannada ZP CEO, who mooted the concept, said these nests are being built to enable villagers to spend some time in the day with books and periodicals. “People can sit at the nest and read or take the book along with them and bring it back a couple of days later,” he told The Hindu.

These nests have been constructed by panchayats using development funds and local donations. The panchayats have purchased some books and are getting some from people.

In Udupi district, the ZP and the office of Deputy Director of Public Instruction have jointly taken up the ‘Akshara Joolige’ (A literature carrybag) drive to collect extra books in the locality. These will be used in school libraries of schools or of panchayats.

N.H. Nagaur, DDPI, Udupi, said once a week teachers move around with a handbag in localities around the school to collect books that children can read. “Some of the donors have come forward to donate books on the their own,” he said. Among those who have donated books include K.N. Murthy from Kunjibettu village who has donated 20 old books. “I personally went to his house to collect those books from him,” he said. The staff at the Holeyangadi Gram Panchayat have erected a shed near the panchayat office to enable people read the books, he added.